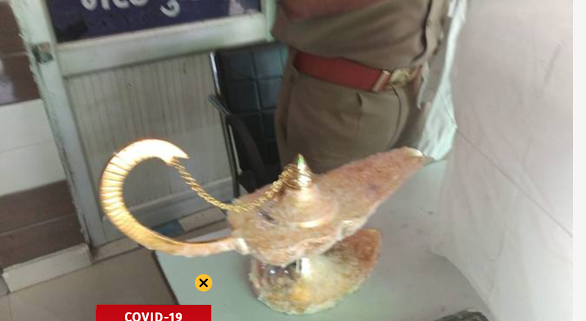 "In an incident that reminds how human greed is beyond reason, two persons have been arrested in Meerut for allegedly duping people with what they claimed is ‘Aladdin’s Chiragh’.

Meerut Police have arrested Ikramuddin and Anis on the complaint of one Laiq Khan for allegedly duping him of ₹2.5 crores after promising him that all his wishes would be fulfilled through the magical lamp.

“Laiq, who apparently specialises in Ayurveda and claims to be a doctor used to treat the mother of the accused Ikramuddin, himself a tantrik (occult practitioner). Ikramuddin promised the doctor that he had a lamp that would make him a billionaire,” said SHO, Brahmpuri Subhash Atri.

Anis and Ikramuddin have been booked under sections 386 (extortion after putting a person under fear of death or grievous hurt and 420 of IPC.

Mr Khan, who claims to have spent some time in London, told the police that Ikramuddin and his brother-in-law Anis would make a djinn appear in a dark room. “When Laiq would ask them to sell the lamp, they would scare him by saying that it would bring bad things to him. Ultimately, they agreed to sell [the lamp] him for ₹70 lakh but told him not to use it for six months otherwise the djinn would destroy his family,” said Mr Atri.

According to the SHO, however, Ikramuddin confessed to having duped Mr. Khan of only ₹40 lakhs. “He said the rest of the amount was paid back to the doctor to win his trust. We are investigating his account and would attach a house that he says he built from the amount received.”

Mr Atri said the modus operandi of the accused included winning the trust of the people by first showing them the results of the magical lamp. “For instance, they would ask people to give them ₹5 lakhs and give them ₹7 lakhs in return. In some cases, they would bury the money in some secluded place and ask the client to go there and dig it out. Such practices convinced people of their power.”

Mr Atri said Ikramuddin tried to convince the police too about the powers of the lamp.

He said Meerut police were tracking the duo for some time. “As they have no fixed place of residence, it was hard to fish them out. Such practices mostly work on word of mouth. Finally, after a tip-off from a mole, they were nabbed on October 25. When Mr. Khan realised that the police were after Ikramuddin, he became circumspect and approached us.”

Now, the artificial, gleaming ‘Aladdin ka Chiragh’ is a case property along with the stone that was used to rub it. “As long as man is driven by greed, such cases would keep on happening,” Mr Atri said.

Posted by Michael Lundell at 4:53 PM