I happened upon this historical bit of interest because of the news story pasted below. There are a set of houses in Richmond Heights Missouri that are called "The Forty Thieves Houses" because they were originally built out of stolen/borrowed building supplies from the nearby Lousiana Purchase Exposition in St. Louis in 1904.

Not sure if the Exposition had much to do with the Nights but it would be interesting to research. Many of these expositions had Nights-esque Orientalisms which developed things like "belly-dancing" and many of the US's notions of the East because the kitschy entertainments were linked with historical information presented as truths.

More information about the expo:
http://en.wikipedia.org/wiki/Louisiana_Purchase_Exposition

Related gov't documents mentioning the housing and its history:
http://www.dnr.mo.gov/shpo/nps-nr/02000983.pdf

from these gov't documents this source will likely provide more info:
Pat Kent and Betsy Feldman, "Forty Thieves,"
Down Memory Lane, comp. Historical Sunday and Tour of the City (St. Louis: The Print House, May 15, 1988) 2.

Book selection about Richmond Heights which mentions the houses:
http://books.google.com/books?id=riJCDTOEJ4IC&pg=PA65&lpg=PA65&ots=_aKjuo-X1a&output=html

Recently posted article about one of the houses being sold:

Ms. Schaffer is the associate director for collection management at the Bernard Becker Medical Library at Washington University in St. Louis. She's worked at the Graduate School of Library and Information Science at the University of Illinois at Urbana-Champaign.

and some views from Zillow:

http://www.zillow.com/homes/map/7210-Dale-Ave-richmond-heights,-mo_rb/
Posted by Michael Lundell at 11:32 AM No comments:

I just discovered this great site which has a lot of uploaded scans of posters and flyers for old pantomimes and plays, many of which are Nights related.

http://www.its-behind-you.com/pantobills1.html
Posted by Michael Lundell at 7:46 PM No comments: 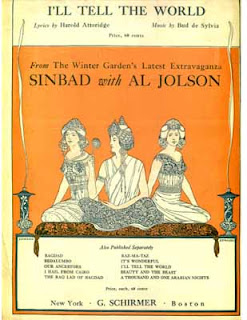 Posted by Michael Lundell at 2:08 PM No comments:

Here are some Youtube videos of Sonic and the Secret Rings video game featuring an Arabian Nights sort of theme. The usual suspects are here: Ali Baba, Aladdin and Sinbad. Why can't they make a videogame based on the Porter and the Three Ladies of Baghdad?

Here's the intro with the storyline behind the game (a bit long but interesting to see the incorporation of the Nights theme), the rest of the clips are shorter:

Sinbad (with Burton's spelling of Rukh!):

The 40 Thieves and King Solomon:

General Themes of the Stories of the Nights:

Posted by Michael Lundell at 11:23 PM No comments:

This is a European film from Luxembourg I've not yet seen directed by Paul Kieffer. It seems to combat/deal with the Orientalistic notion of the Nights and of the Middle East (ie France past re-imaginings of Algeria and the contemporary Algerian immigrant experience in France, etc.) but the plot doesn't seem to resemble any of the tales of the Nights.

It's about a French train conductor who falls for a "lower class" Algerian woman who rides his train. When she disappears he goes to Algeria to look for her and a Oriental fantasy ensues.

While it was released in Europe in 2007 it has only recently been spotted in US film festivals.

Stanley Lane-Poole & the Truths of the Nights

In his 1906 introduction to Lane's Nights, Stanley Lane-Poole outlines some of the essential truths about the 1001 Nights in such a compact and succinct way that they still hold up as one of the best today. Despite no mention of Nabia Abbott (her finding was in the late 1940s) Lane-Poole's introduction sums up nicely the few truths one can speak of when talking about the 1001 Nights.

Even his statement that Galland "discovered the Arabic original," while problematic, still seems to be the case. Galland's manuscript remains the oldest (apart from the few scraps of story that Abbott found) collection of the 1001 Nights.

I included paragraph breaks for easier reading online although this selection is all one paragraph:

"Few story-books have enjoyed the popularity of the "Arabian Nights." For two centuries children have marvelled at the wonders of the Eastern fairyland and older readers have delighted in the picture of mediaeval Arab life which the "Thousand and One Nights" unfold. It is singular that so little should be known of the origin and history of a book so renowned.

We know that Galland discovered the Arabic original and published his French translation in 1704-1707, but of the date and place and manner of its composition we know scarcely anything.

The native critics of Arabic literature paid small attention to a collection of romances which appeared to them (as one of them wrote) only as a "corrupt book of silly tales." A work called the "Thousand Nights" or "Thousand and One Nights" is referred to twice in the tenth century by Arabic historians, who say it was translated from a Persian story-book called the "Thousand Tales"; but we do not possess this Persian book, and have no means of determining how far it corresponded with the "Arabian Nights" as we know it, or how far the "Thousand and One Nights" of the tenth century resembled the book which Galland and Lane and others translated.

All that we can safely deduce from these meagre references is that the framing scheme of the "Nights" - of the jealous Sultan who kills a wife every morning till Shahrazad keeps him interested in her stories - was borrowed from the Persian "Thousand Tales," and that a few of these tales were apparently identical with some which are included in the "Arabian Nights.""

Email ThisBlogThis!Share to TwitterShare to FacebookShare to Pinterest
Labels: lane

Professor Jack Ross is another Nights enthusiast and an experienced scholar of the Nights, as well as author, professor, and poet.

His 1001 Nights blog is linked to this one on the sidebar but he also occasionally publishes Nights related material on his other, more often updated, blog.

Here is his review of the Lyons versions and a great overview of past English language versions:

http://mairangibay.blogspot.com/2008/12/new-translation-of-arabian-nights.html
Posted by Michael Lundell at 4:28 PM No comments:

The American Oriental Society is holding their annual meeting at the moment in New Mexico and there is one paper being read about the Arabian Nights and poetry (the only paper on the Nights at this year's meeting). It is an interesting subject I've not read much about. I'm under the impression that Muhsin Mahdi excised poetry from his reproduction of Galland's Arabic manuscript though I'm not sure to what extent.

This paper is about the relationship of the Classical poetry that the first and subsequent Arabic authors/compilers of the Nights "pasted" and wrote amongst the prose.


PDF of Abstracts (Arabian Nights is on page 27):

Paper will be presented Saturday Morning as part of the meeting of the "New Readings of Classical Arabic Literature" from 1030-1210pm in Alvarado G-H.

"Wolfhart Heinrichs, Harvard University
- Modes of Existence of Poetry in the Arabian Nights

The Arabian Nights are an example of prosimetrum (prose interspersed with poetry), a literary phenomenon that has only recently attracted the attention of Arabists. The paper will dwell on some features that are characteristic of the role of poetry in Alf Laylah wa-Laylah: (1) The poems have been compared by John Payne, the 19th century translator of Alf Laylah, to woodcuts in Western publications. Unlike the woodcuts, the poems are, of course, in the same medium as the narrative; however, often they are quotations of classical poetry and, thus, in the Classical language rather than in the "Middle Arabic" of the narrative, which makes the parallelism between Alf Laylah poems and woodcuts somewhat stronger. The remaining poems are presumable mostly composed by storytellers and/or copyists; nonetheless, they still predominantly follow the classical language and prosody. Only a few are "beyond repair." (b) Most poems are adduced according to Bencheikh's rule: "If the story narrates a passion, the poem represents it." In some cases the poem is introduced by a formula that identifies the situation described in the prose with the description of the poem. E.g., the description of a hunchback is preceded by kama qala fihi badu wasifihi, as if the quoted poem had been written about the hunchback in the story. The strangest stratagem in this category is the lisan al-hal, the "voice of the situation," which is used, when the protagonists cannot speak, but the situation cries out for a poem; the lisan al-hal is presented as "writing" and "speaking" the poem (kataba lisanu halina yaqul). Thus the insertion of poems often betrays great sophistication. The storytellers and/or copyists may even manipulate the slots for poems, and certainly the slot-fillers, as the various text traditions clearly show."
Posted by Michael Lundell at 8:03 PM 2 comments:

Frankenstein and the 1001 Nights

Every book I read mentions the Nights for some reason, even/especially if it doesn't seem like it should.

What had been the study and desire of the wisest men since the creation of the world was now within my grasp. Not that, like a magic scene, it all opened upon me at once: the information I had obtained was of a nature rather to direct my endeavours so soon as I should point them towards the object of my search, than to exhibit that object already accomplished. I was like the Arabian who had been buried with the dead, and found a passage to life, aided only by one glimmering, and seemingly ineffectual, light.

From the Fourth Voyage of Sinbad the Sailor, in The Thousand and One Nights

and there are many later references to orientalism and these mysterious Arabians throughout the book, here is VF's childhood friend Henry:

Resolved to pursue no inglorious career, he turned his eyes toward the East, as affording scope for his spirit of enterprise. The Persian, Arabic, and Sanscrit languages engaged his attention, and I was easily induced to enter on the same studies. Idleness had ever been irksome to me, and now that I wished to fly from reflection, and hated my former studies, I felt great relief in being the fellow-pupil with my friend, and found not only instruction but consolation in the works of the orientalists. I did not, like him, attempt a critical knowledge of their dialects, for I did not contemplate making any other use of them than temporary amusement. I read merely to understand their meaning, and they well repaid my labours. Their melancholy is soothing, and their joy elevating, to a degree I never experienced in studying the authors of any other country. When you read their writings, life appears to consist in a warm sun and a garden of roses, - in the smiles and frowns of a fair enemy, and the fire that consumes your own heart. How different from the manly and heroical poetry of Greece and Rome!

The resources of his mind on this occasion were truly astonishing: his conversation was full of imagination; and very often, in imitation of the Persian and Arabic writers, he invented tales of wonderful fancy and passion.

There are also several other references to the Middle East but these seem to be directly influenced by the Nights at least.
Posted by Michael Lundell at 11:51 PM No comments: