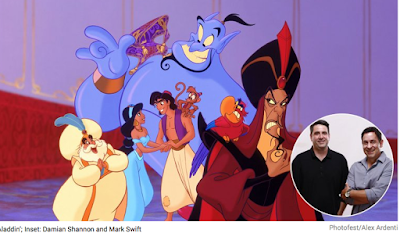 Thanks to Paul for passing this along. Our friends at Disney are in the works putting together a live-action prequel to Aladdin (1992) called Genies. It's apparently the back story of the Genie's life. It is being written by Damian Shannon and Mark Swift (the duo behind Freddy vs. Jason (2003)) and produced by Tripp Vinson.

"The new project would focus on the realm of the Genies and reveal how Aladdin's Genie ended up enslaved in the lamp.

Although Genies is only in the early stages of development, the long-term plan is to have the project lead into an Aladdin live-action movie."

Posted by Michael Lundell at 9:57 AM No comments: