Parodies of the Nights

I found this interesting musing on the excellent blog and online Nights resource Scheherazade's Web -  http://dinarzade.blogspot.com/

It's an essay by Jack Ross on parodies of the Nights in Western literature and investigates even the nature of what parody is itself.

You can read the entire essay here - http://dinarzade.blogspot.com/2007/09/parodies-of-arabian-nights.html

"The Nights, in short, fight back - for if a parodist simply counterfeits the manner of the stories without rivalling their plots, then his critique inevitably draws fire. Thackeray, never strong in this respect, is forced to borrow a story from a German Orientalist; Dickens - whose satire is directed at British politics rather than the Arabian Nights themselves - contents himself with retelling the stories of the Merchant and the Genie, the talkative Barber and Ali Baba and the Forty Thieves. Poe adds a new voyage to Sindbad’s seven (a favourite expedient - witness the 1970s’ film of The Golden Voyage of Sinbad, or John Barth’s Last Voyage of Somebody the Sailor).

Of our mid-nineteenth-century group, only Twain and Meredith (and Théophile Gautier) invent their own plots. What is more, none of our authors are self-confident enough to see their stories succeeding where Scheherazade’s have failed. Gautier’s thousand-and-second night, supplied by him in Paris at the urging of the exhausted storyteller herself, proves insufficient to prevent her execution; Poe’s narrative positively provokes it; while both Thackeray and Dickens ignore the necessity for an ending. They become collaborators with the frame-story, rather than rivals to it (there is, in fact, a translation of the Nights which ends with just such a dénouement, the bored Sultan cutting off Scheherazade’s head.

One might sum up, then, by saying that while the enterprise of writing a parody of the Arabian Nights may, at first sight, seem a futile one, it obviously did not appear so to these authors - especially the ones who published their work and who thus presumably expected it to be read and enjoyed."
Posted by Michael Lundell at 1:44 PM No comments: 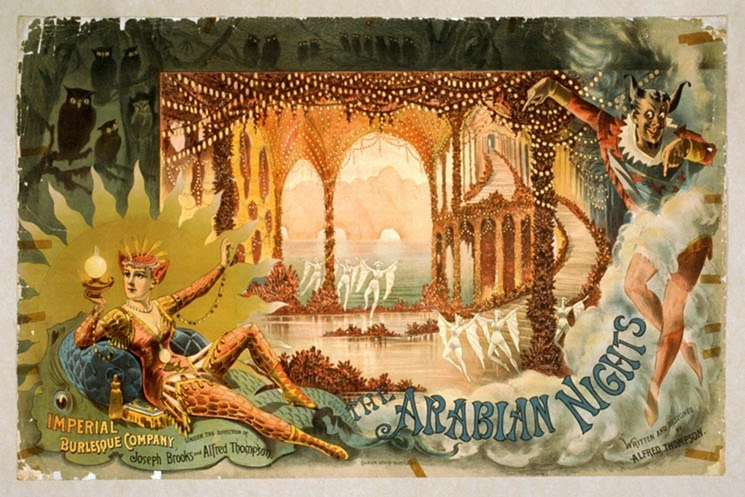 From the March 4, 1932 edition of the Eagle Valley Enterprise., comes this clip -

It is generally supposed that the 'Arabian Nights,' and others of these weird strange Eastern tales were written under the influence of hasheesh, which lends such a marvelous brilliancy to the imagination"

Posted by Michael Lundell at 11:14 PM No comments: