Here's a picture of a stamp with an illustration from "Sinbad," (or at least the suggestion of one!), from Ras Al Khaimah in the United Arab Emirates, a onetime home of mine for almost five years (Abu Dhabi, UAE)! 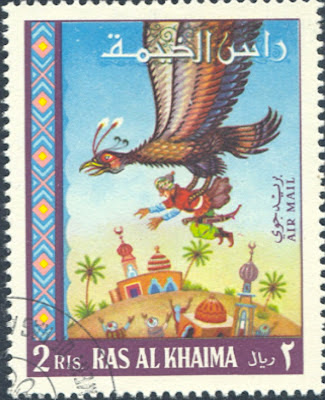 Posted by Michael Lundell at 4:31 PM No comments:

Here are a couple of posters from the Imperial Burlesque Company's Production The Arabian Nights or  Aladdins Wonderful Lamp, dating from the late 19th century.  Thanks JC. 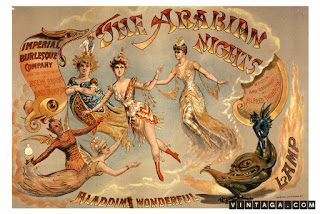 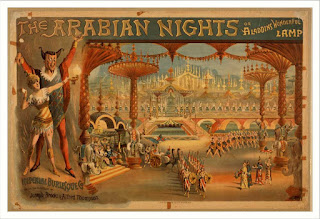 Posted by Michael Lundell at 9:24 AM No comments:

Visions of the Jinn - Reviews 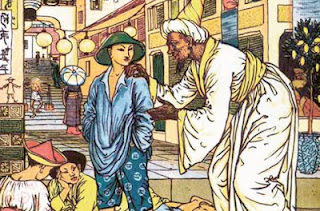 Aladdin's Picture Book Arabian Nights, Illustration by Walter Crane, 1878
There are a bunch of great reviews out on Visions of the Jinn, here are excerpts of and links for two:

Many thanks to Ghada for passing along this review of Robert Irwin's new book on the illustrations/illustrators of the Nights from brainpickings.org.

Irwin's book is currently only in hardcover format and costs almost $200.

Here's part of the review, it has great pictures from the book so do visit their site, this review was reprinted in the Atlantic Monthly too, but don't know the connection between brainpickings and the Atlantic.

From the review:  "Even though the editions since Lane’s scholarly translation had progressed in the realm of visual imagination, the content had remained rather sterilized and prudish. It wasn’t until the 1885-1888 publication of Richard Burton’s sixteen-volume translation that themes of sexuality emerged, complete with extensive notes on topics like homosexuality, bestiality, and castration. Though Burton’s original edition featured no pictures in order to avoid prosecution for obscenity, shortly after his death in 1890 a young friend and admirer of his by the name of Albert Letchford, who had trained in Paris as an orientalist painter, created 70 paintings, which eventually became the basis for the next edition of Burton’s translation. With a keen sensibility for fantasy and a shared interest in the erotic to complement Burton’s own, Letchford’s artwork featured many nudes and were infused with sensuality. Ironically, Letchford contracted an exotic disease in Egypt and died at a young age."

Here is a more extensive review from the TLS, many thanks to Moti for passing this along, I've excerpted bits of it below, for the entire review see:  http://www.the-tls.co.uk/tls/public/article858481.ece

Visions of the Arabian Nights

Posted by Michael Lundell at 11:26 AM No comments: 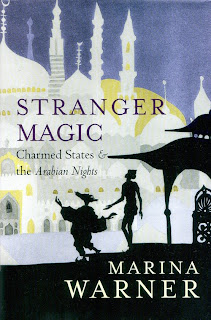 A new book has emerged from the UK, written by Marina Warner (http://www.marinawarner.com), a Professor at The University of Essex and noted author.

Below is a review from the Guardian. Here is a link to it: http://www.guardian.co.uk/books/2011/nov/11/stranger-magic-marina-warner-review.

The Arabian Nights constitute, in Marina Warner's words, "a polyvocal anthology of world myths, fables and fairytales". The antecedents of these Arab-Islamic texts (also known as The Thousand and One Nights and the Arabian Nights Entertainments) are Qur'anic, Biblical, Indian, Persian, Mesopotamian, Greek, Turkish and Egyptian. In them, oral and written traditions, poetry and prose, demotic folk tales and courtly high culture mutate and interpenetrate. In their long lifetime the Nights have influenced, among many others, Flaubert, Wilde, Márquez, Mahfouz, Elias Khoury, Douglas Fairbanks and the Ballets Russes.

The framing story, in which Shahrazad saves her life by telling King Shahryar tall tales, is only one such ransom recounted in the tales. More than simple entertainment, then: throughout these stories within stories, and stories about stories, narrative even claims for itself the power to defer death. Although oral versions of the Nights long percolated through Europe (elements turning up in Chaucer, Ariosto, Dante and Shakespeare), the tales were established in the mainstream of European popular and literary culture with Galland's early 18th-century French translation. Galland purged the eroticism and homosexuality, added tales from the dictation of a Lebanese friend, and perhaps invented the two best-known and seemingly most "Arabian" tales of all: "Aladdin and the Magic Lamp" and "Ali Baba and the Forty Thieves".

Warner quotes Jorge Luis Borges (a guiding spirit in her book) approving this belle infidèle approach to translation. "I think that the reader should enrich what he is reading. He should misunderstand the text; he should change it into something else." It's this changing aspect of the Nights as a time-travelling, trans-civilisational cooperation that fascinates Warner. She sees in it "a unique key to the imaginary processes that govern the symbolism of magic, foreignness and mysterious power in modern culture".

Stranger Magic, influenced by the work of Edward Said, is an endeavour to uncover "a neglected story of reciprocity and exchange". One of Warner's central intentions is to show that while Christendom and Islam were politically and religiously in a state of hot or cold war, science, philosophy and art recognised no frontiers. Yet this openness closed somewhat from the Enlightenment on, when Europe sealed magic off from science, imagination from reason, and also east from west. The Enlightenment, of course, was the point at which the Nights was translated to such rapturous European reception, and not by accident. The "home-grown practice of, and belief in, magic was set aside to be replaced by foreign magic – stranger magic, much easier to disown, or otherwise hold in intellectual or political quarantine".

So to the orientalisms of Edward Lane and Richard Burton's English translations, which not only presented the medieval fantastic as a documentary resource for understanding the "unchanging" and now colonially subjected Arab culture of the 19th century, but also projected on to the exotic foreign screen fantasies and fears that would have been taboo in a domestic context. Burton famously re-sexualised the tales with his own copious notes on the east's supposed perversions.

Stranger Magic is an enormous work, 436 densely erudite and eclectic pages plus another hundred of glossaries and notes. In its relentless connecting up of diverse stories, from the Inferno to Philip Pullman's His Dark Materials, it's reminiscent of Christopher Booker's brick-sized Seven Basic Plots. Warner's chapters, allocated into five parts, are beautifully illustrated and interspersed with 15 tales concisely retold.

Part one focuses on the jinn (or genies) – who behave, like the Greek gods, badly, capriciously, illogically – and also on the figure of Solomon, a master of the jinn in his Islamic version, here located in the white wizard tradition somewhere between Gilgamesh, Merlin, Prospero and Gandalf. It includes one of the book's many delightful discoveries: a 14th-century Syrian treatise on the legal status of jinn-human marriages.

The second part attends to the Arab and European habit of attributing foreignness to evil magicians. These dark enchanters come from dark places (Africa and India) and profess dark (pre-Islamic) faiths. During the Enlightenment, black magic became inevitably dark skinned; necromancy became inseparable from "nigromancy".
Warner also examines how the stories "test the border between persons and things" and how severed heads that speak, books that kill and carpets which fly can be linked to the objects of our modern world – not only cinema's animations but also the prosthetic goods of everyday life, the designer labels, gadgets and vehicles by which we project and define our personalities.

Warner moves from considering the derivations and meanings of the word "talisman" to reflect on her own attachment to talismans in her Catholic girlhood (her personal appearances in the book are apt, easing the academic tone) before launching into a fascinating discussion of the talismanic properties of paper money.

There is much on writerly responses to the Nights, including Voltaire's contes, Goethe's "East-West Divan", and (a great chapter) the neglected Gothic novelist and Islamophile William Beckford. The book ends with an examination of flight, cinema, shadow play and Freud. Warner describes the Hampstead cave of wonders that was Freud's final consulting room, "a darkling mirror of the furnishings of his mind", and the iconic analytical couch draped in oriental cushions and rugs. Specifically a Ghashgha'i tribal rug, which leads by glorious digression to Mohsen Makhmalbaf's rug-themed Iranian film Gabbeh, and to a reminder that oriental rugs, the Nights and psychoanalysis are all narrative forms.

Stranger Magic is a scholarly work that often reads like a fireside conversation. It's encyclopediac, a book to be savoured in slices, yet (inevitably) it's easy to think of further potential topics – giants, for instance, or dervishes, or magical realism from the Arabs via La Mancha to the Latin American boom. But Warner's conclusion reminds us of her organising principle: the uses of enchantment to open new possibilities of thought and sympathy – the necessity of magic, especially in a self-consciously "rational", secular world.

•Robin Yassin-Kassab's The Road from Damascus is published by Penguin."
Posted by Michael Lundell at 11:39 AM No comments: