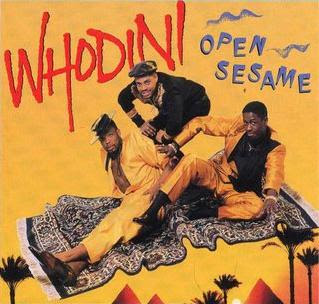 Here's the cover from the 1987 album Open Sesame by rap group Whodini. Actually one of my first CDs. Little more than a reference to the Nights on the cover and not in any songs as I can recall but an interesting manifestation nonetheless.
Posted by Michael Lundell at 6:22 PM No comments:

The Beastie Boys, who of course, have been rhymin' and stealin' ducats for many years now, and their classic refrain, which comes about midway through the song: "Ali Baba and the 40 Thieves, etc."

Here's the official video. The song, by the way, is just about as postmodernistically pop as you can get, an unexplained and unashamed celebration of imagined piracy inculcated with scores of seemingly unrelated elements ("I shot Betty Crocker, Delivered Colonel Sanders down to Davey Jones' Locker..") which gel together in a very certain and very solid framework. Due to the overall maritime theme though, I wonder if "Sinbad" is a more appropriate Nights character, but chanting "Sinbad" doesn't seem as right does it.

Posted by Michael Lundell at 1:09 PM No comments:

ulysses and the 1001 nights

I'm presenting a sort of preliminary paper at the upcoming Joyce Conference at UC Irvine and the topic is the relationship between James Joyce's Ulysses and the 1001 Nights.

I say preliminary because thankfully that is the format of the conference as everyone will be presenting a 5 page argument abbreviated paper instead of a fully developed one and thankfully because my argument isn't as developed as I intend it to be.

What I'm suggesting in this paper is that previous scholarship on both the Nights side and the Joyce side fail to fully develop which specific version of the Nights Joyce used for inclusion in Ulysses. Aida Yared has an article which convincingly argues that Joyce had not read any version in particular before Finnegans Wake and that Joyce uses extensively from Burton's specific version in the Wake.

The primary function of the Nights in Ulysses seems to be as part of the English/Irish pantomime and not of any textual version.

Once you begin looking at the specific version of the Nights Joyce uses you can begin to uncover the ways in which he uses the Nights in Ulysses.

In any case, I think most scholarship on Joyce and the Nights apart from Yared's article just mentions the 1001 Nights in a general sense and that they influenced Joyce but not to what extent nor which specific versions of the Nights and in what ways.

For whatever that's worth it's sort of the direction this paper is heading. It'll be my first conference paper too.

Next year another Nights movie will be being released if all goes according to plan, according to several sources, thanks to Paul for bringing this up.

The new film is allegedly based on the 1942 film Arabian Nights which was a technicolor Orientalistic Hollywood Blockbuster starring Sabu and Maria Montez (and Shemp of Three Stooges fame!). The 1942 movie had nothing to do with any of the Nights' stories as far as I can tell besides using some names like Sheherazade and Ali Baba (but ultimately I suppose that makes it part of the Nights canon regardless).

Here is the trailer for the original 1942 film:

The new film is reportedly (http://www.mania.com/arabian-nights-3d-coming_article_118656.html) going to be shot in 3D and is directed and co-written by Chuck Russell, director of The Scorpion King among being associated with many other films. At $70 million USD it's likely to be on a blockbuster scale (maybe for next summer?).

Regardless, the Nights lives on, better than ever I suppose.

More info on the upcoming film: 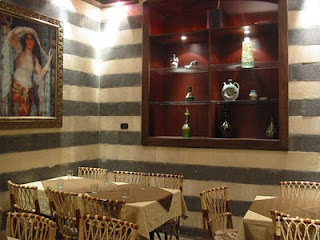 One of my favorite restaurants that I found in the Old City of Damascus Syria last summer is Bab Al-Hara (an online review: http://gomideast.com/syria/damascus/restaurants/babalhara.html)).

On the wall in the picture above is a reproduction of the painting Safie, One of the Three Ladies of Bagdad - 1900 - William Clarke Wontner. Just thought it was an interesting connection.

If there is any city in the world that exudes the 1001 Nights and all of its complexities and stories it has to be the Old City of Damascus.
Posted by Michael Lundell at 8:45 PM No comments: