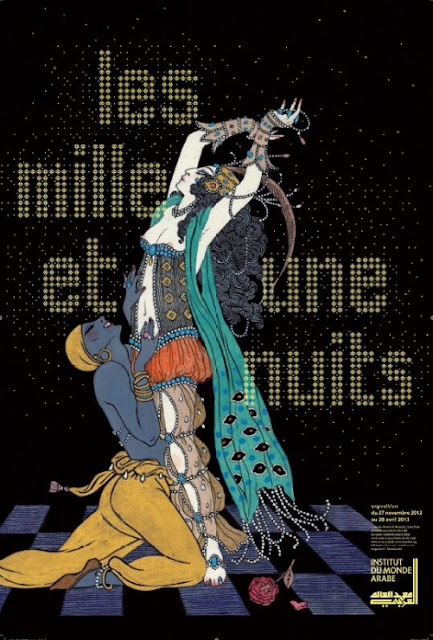 The Institut du monde arabe in Paris is holding a Nights-themed exhibit through April of 2013.

"AFP - Full of flying carpets, genies, love and battle, a Paris show opening Tuesday lifts the curtain on "One Thousand and One Nights", exploring the roots of the folk tales and their powerful influence in the West.

Through some 350 manuscripts, artworks, artefacts and film clips, the show at the Arab World Institute traces the tales' journey from their origin in Indian and Persian folkore, to their translation into Arabic in the eighth century.

And it highlights how the French Orientalist Antoine Galland brought the "Nights" to Western audiences in 1704, translating a manuscript of 35 original tales, and weaving in 35 others gleaned from his studies of the region."

"A Pablo Picasso sketch and an abstract painting by Rene Magritte feature among the many representations of the beguiling beauty at the heart of "The Arabian nights", as the tales are sometimes known in the English-speaking world.

"Scheherazade remains for many a symbol of the emancipating power of speech, of knowledge's triumph over tyranny and a woman's courage in the face of injustice," write the curators.
The show also notes, however, that some modern feminists blame the figure of Scheherazade for perpetuating a narrow vision of women in the Arab world.

Wood-and-bone doors from 15th century Egypt or Syria, or a tiny glazed ceramic oil lamp from ninth-century Egypt -- intend to recreate the setting of the tales, between the great cities of Baghdad, Damascus or Cairo.

And visitors can settle into a listening booth to hear one of 15 tales, or catch a clip from one of 12 movies inspired by the "Nights", from the 1924 "The Thief of Baghdad" with Douglas Fairbanks to Pier Paolo Pasolini's 1974 version."

Check out their youtube site as well for commercials about the events - http://www.youtube.com/imarabe

Posted by Michael Lundell at 10:54 AM No comments:


Just in time for the holiday season Rolls Royce has released a Nights-themed special edition of their Bespoke Ghost Collection.  Available in the Middle East, the cars are expected to cost somewhere around $250k USD.  The pictured one above is the first of three versions, or "chapters" - it was recently released at a car show in Sharjah, UAE.

If this doesn't highlight exactly the virility, versatility and problematic history of the Nights I don't know what does.

Yours truly can't think of a more appropriate gift for my years of blogging service.

Some clips from the media:

"The lower body panels are painted in a deep matte brown, and the sloping hood and pillars (everything above the character line and on the front end’s protruding grille surround) are painted a matte caramel. The scheme is striking if nothing else, even though reminds us more of Rolo candies than than West/South Asian folklore. Perhaps we’re not cultured enough to appreciate the symbolism."

The rear seats, as usual, have DVD screens in the front seatbacks…all the better to watch Disney’s commercialized adaptation of Aladdin, one of the many One Thousand and One Nights stories. If that seems a bit gauche for you, we’d recommend turning up the Ghost’s sound system improved for 2013 with headliner-mounted tweeters) and popping in a CD of Scheherazade, Rimsky-Korsakov’s famous musical adaptation of the same collection of stories."


"One Thousand and One Nights, the epic tales told by Scheherazade to Shahryar, are among the region’s most famous works of literature. Just like the books, Rolls Royce Ghost 1001 Nights collection will be launched in three chapters, with the first one to be launched at at the Sharjah International Automobile Show on 28 November 2012."

"It’s getting difficult to keep track of all the Rolls-Royce special-edition models, but we have one more to add to the list: the Rolls-Royce One Thousand and One Nights Bespoke Ghost Collection. Created to increase interest in the cars for markets in the Middle East, the special Rolls-Royce Ghosts have two-tone paint that’s said to be inspired by the stories of “The Arabian Nights.”"

Posted by Michael Lundell at 9:09 AM No comments:

Longtime Nights admirer and writer who can hold his own just fine Jorge Luis Borges speaks about El Libro de las mil y una noches. This 40+ minute recording is part of a series of lectures he gave on literature in 1977 (en Spanish):

Posted by Michael Lundell at 9:43 PM No comments: