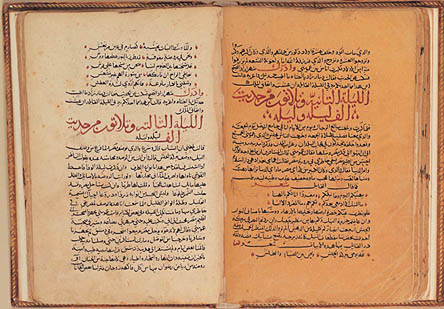 This image is allegedly of the Galland manuscript from the wikipedia page for the Nights.  There is no attribution though so who knows.  It's the most often used image online of the manuscript though.


The often-called “Galland manuscript” is an Arabic language manuscript of the Nights in the Bibliotheque nationale in Paris France.  Its call numbers at the library are MSS arabes 3609, 3610 and 3611.  It is the oldest manuscript of the Nights in any language that contains any stories and people have dated it to somewhere around the 15th century AD.  This date is disputed however and some think it is written earlier in the 14th century.

It’s not clear who the author or scribe is (yet! maybe you can find out) or exactly where or when or how this manuscript came into being (besides allegedly being sent from Syria to Galland in 1701).

There are three volumes.

I've never read about a certain title on this manuscript nor are the stories individually titled (can someone verify or refute this?) yet they are segmented into numbered “nights.” On the picture above however each section clearly says "Alf Layla wa Layla" in Arabic.

These volumes were in Antoine Galland’s personal library and he appeared to use them as the primary (but far from only) source for the beginning volumes of his French translation of the Nights which were titled Mille et une Nuits (1704-1717). (Thanks to JC for the dates of publication).

Galland received the Arabic manuscript volumes in 1701 while in France.  A friend seems to have brought from Syria, but was in France with them when Galland acquired them.

Galland had requested that his colleagues look for the complete or original Nights after he translated a stand-alone version of “Sindbad” (aka “Sinbad the Sailor and Sinbad the Porter” or several other related sounding/spelled titles) from Arabic into French that someone told him was a part of a larger body of work (the Nights).

The last story is known generally (though has several different spelling and other title variants) as “The Tale of Qamar al-Zaman and Budur” and does not have an ending.

In 1984 Muhsin Mahdi, a professor at Harvard, published an edited and collated version of this Arabic manuscript (along with a completed version of “Qamar al-Zaman”) in which he attempts to portray the oldest and most authentic Nights as anyone knew them.  His out of print three volume set from Brill consists of the manuscript, several essays in English, several indexes in Arabic including an intensive comparative index and a descriptive chapter of old manuscripts of the Nights and an introduction in Arabic of his theories regarding the various origins of the Nights.  This set is expensive when found but many major university libraries have a copy or have access to one.

In 1990 WW Norton published an English translation by Husain Haddawy of Mahdi’s recension titled The Arabian Nights consisting only of these oldest stories.

In 2004 Claudia Ott translated this manuscript (using Mahdi’s edition) into German.  It was published in Europe under the title Tausendundeine Nacht.

Muhsin Mahdi writes about the acquisition of the G-Manuscript:

"He must have come across the information about the Nights some time between 25 February and 13 October 1701.  On the first date, he wrote a letter to Pierre-Daniel Huet referring to 'Sindbad':  'I also have another little translation from Arabic, stories just as good as the fairy tales published these last years in such profusion.'  On the second date, he wrote another letter to Huet where he mentions the Nights:  'Three of four days ago,' he says, 'a friend from Aleppo residing in Paris informed me by letter that he has received from his country a book in Arabic I had asked him to get for me.  It is in three volumes, entitled . . . The Thousand Nights.'  Even before seeing the manuscript, he describes the acquisition as 'a collection of stories people recite in the evening in that country [Syria]. . . . I asked this friend to keep it for me until I come to Paris, the cost of purchase and shipping being ten écus.  It will be something with which to amuse myself during the long [winter] nights.'

He traveled from Caen to Paris in December 1701 and took possession of the three-volume Syrian manuscript of the Nights (A) that would be named after him.  He seems to have started almost immediately to translate the work; for, in August 1702, he wrote to Gisbert Cuper:  'I have finished a clean copy of a six-hundred page work. . . . I had started it this year [1702] upon my return to Paris [in December 1701], working on it only after dinner. . . . This other work . . . is entitled The Thousand and One Nights, Arab Tales, Translated into French. . . . A thousand and one Nights!, and I have only finished seventy; this can give you an idea of the length of the entire work.'  By the end of the summer of 1702, therefore, he had finished a clean copy of the first two volumes of his Nuits, covering the first sixty-nine Nights or slightly more than the first volume of his Arabic manuscript.  These were published early in 1704, followed by the next four volumes in 1705.  The first volume contained the dedication to the Marquise d'O and an Avertissement exposing his appreciation of the Nights."

Feel free to add related bibliographic info (a short bibliography is listed below) and or other info or corrections in the comments section (or just email me too).  I’ve put only English and one Arabic resource below but I’m certain there are many more I’ve missed in all languages.

Here is the table of contents as rendered in English by Husain Haddawy:

Prologue:  The Story of King Shahrayar and Shahrazad, His Vizier's Daughter

The Story of the Merchant and the Demon

The Story of the Fisherman and the Demon

The Story of the Porter and the Three Ladies

The Story of the Three Apples

The Story of the Hunchback

The Story of Jullanar of the Sea

Bibliography Specific to the Galland Manuscript:

Wollamshram's Blog Post on the breakdown of the volumes and contents of Galland's (French) Nights:


See also the relevant sections from the following books:

And the entries “Manuscripts,” “Galland, Antoine,” and “Sindbad the Seaman” in The Arabian Nights Encyclopedia (volumes one and two) edited by Ulrich Marzolph and Richard van Leeuwen.

Reynolds, Dwight F. "A Thousand and One Nights: a history of the text and its reception." Arabic Literature in the Post-Classical Period. Eds. Roger Allen and D. S. Richards. Cambridge University Press, 2006.

Grotzfeld, Heinz.  “The Age of the Galland Manuscript of the Nights:  Numismatic Evidence for Dating a Manuscript.”  Journal of Arabic and Islamic Studies I:  50-64.  1996-7.

And the following oldies but goodies from Duncan MacDonald:

“Lost Manuscripts of the ‘Arabian Nights’ and a Projected Edition of that of Galland.”  Journal of the Royal Asiatic Society:  219-221.

“A Preliminary Classification of Some Mss. of the Arabian Nights.”  A Volume of Oriental Studies:  Presented to Edward G. Browne on his 60th Birthday.  Eds. Thomas W. Arnold and Reynold A. Nicholson.  Cambridge:  Cambridge UP, 304-321.  1922.

“The Earlier History of the Arabian Nights.”  Journal of the Royal Asiatic Society, 353-397.

“A Bibliographical and Literary Study of the First Appearance of the Arabian Nights in Europe.”  Library Quarterly 2:  387-420.  1932.

In Arabic Muhsin Mahdi has a collection of manuscript descriptions including the Galland manuscript in volume II of The Thousand and One Nights from the Earliest Known Sources.  Leiden:  Brill.  1984.
Posted by Michael Lundell at 11:02 PM