Scheherazade 'a role model for women'

The following excerpts are from the article:

by Manel Ismail writing in the Emirates' news-site The National

The article is about a recent talk on the feminist elements at play in the Nights and its main character/narrator the ever-reproductive Scheherazade.

Not sure what kind of role model Scheherazade is, but this speaker suggests that all women follow her example.  I suppose that means....??  What do you think?


"ABU DHABI // Superwoman can fly and Wonder Woman has incredible strength but the Arabic storyteller Scheherazade may well be the best heroine of them all.

Around for hundreds of years, what makes her such a strong role model is her ability to use her mind and wit to captivate people with her enchanting tales -and not X-ray vision.

Author, professor and former journalist Alia Yunis explained why the character from 1,001 Arabian Nights is a true inspiration. She was speaking at TEDxAbuDhabiU, an event that provides a platform to exchange ideas across all industries.

The tale from the Islamic Golden Age tells the story of an Arabian king who was betrayed by his wife. He goes on to marry a series of virgins, only to execute them the following morning - until he meets Scheherazade. For 1,001 nights, she distracts him with her stories, saving her life and the lives of other women, until the king falls in love with her.

The TEDx event was held at the weekend under the theme "Dare to" and Ms Yunis dared women to follow Scheherazade's footsteps and use their experience, knowledge and skills to become superheroines."

The entire article can be read aqui:  http://www.thenational.ae/news/uae-news/arabian-nights-character-scheherazade-a-role-model-for-women
Posted by Michael Lundell at 11:53 PM No comments: 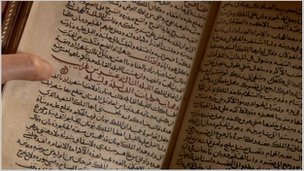 picture from:  http://www.bbc.co.uk/news/world-13086639
Secrets of the Arabian Nights is a BBC Four "programme" scheduled to air shortly (tomorrow, if you are, like me, in California, later tonight if you are in London).

It seems to be a basic history of the Nights, with actor Richard E Grant narrating, and taking viewers on a tour of the Middle East, and other locations (including, I think, the National Library in Paris).  Doesn't seem to add anything new to the conversation, but then again, it's always nice to see a Nights piece out at work in the world.

I'd like to see it, perhaps it will show up on youtube shortly, or somewhere else accessible.  If you are in the UK, you can watch it online via the BBC's website:

"The Arabian Nights first arrived in the West 300 years ago, and ever since then its stories have entranced generations of children and seduced adults with a vision of an exotic, magical Middle East. Actor and director Richard E Grant wants to know why the book he loved as a child still has such a hold on our imagination.

He travels to Paris to discover how the stories of Sinbad, Ali Baba and Aladdin were first brought to the West by the pioneering Arabist Antoine Galland in the early 18th century. The Nights quickly became an overnight literary sensation and were quickly translated into all the major European languages. Richard then travels to Cairo to explore the medieval Islamic world which first created them.

He quickly finds that some of the stories can still be deeply controversial, because of their sexually-explicit content. Richard meets the Egyptian writer and publisher Gamal al Ghitani, who received death threats when he published a new edition of the book.

He also finds that the ribald and riotous stories in the Nights represent a very different view of Islam than fundamentalism. Can the Nights still enrich and change the West's distorted image of the Arab world?"

Here is an article from BBC News about the show:

Not sure about the article, particularly these passages, which seem based in the speculative romanticism that has forever plagued the Nights:

"The tradition of oral storytelling and embellishment down the centuries makes perfect sense when you consider that tribes of nomadic people travelled across North Africa to the Middle East and beyond to India, putting storytelling centre stage around camp fires in the evenings.

Anyone who has ever played that game where one person whispers the beginning of a story into someone else's ear and they then have to repeat and add to it, will know how a story evolves and expands very quickly.

Likewise, the oral tradition of repeating the stories that make up The Arabian Nights, told by different people over a period of 10 centuries, will be hugely variable."
Posted by Michael Lundell at 9:57 PM No comments:

Many thanks to Paul for passing on this picture for the upcoming film Sinbad: Rogue of Mars, set to be released in 2012.

Sinbad in space!  It's based on an old Ray Harryhausen produced comic and the film is related to Harryhausen as well.  Imax & 3D (When will the new 3D revival stop?!).

Visions of the Jinn - Robert Irwin

Robert Irwin has a new Nights book out called Visions of the Jinn that looks to shed some promising light on an under-covered topic.  The book is a bit pricey, 120 pounds, but looks to be a hardback oversized coffee table type book, making its price a bit more reasonable.

Many thanks to Paul and Professor Z for passing this along.

Here is the Guardian's review, well more like a press release since it's also written by Irwin, with an excerpt pasted below.  It's well worth the read for its overview of the general history of illustrators of the Nights.


"Things changed with the publication in 1839-41 of Edward William Lane's The Thousand and One Nights in three volumes. Unlike earlier English translators, Lane, who had spent years in Egypt, translated not from Galland's French, but directly from the Arabic. Lane intended his translation to have an improving, didactic purpose and he seems to have thought of it as a kind of supplement to his pioneering work of ethnography, Manners and Customs of the Modern Egyptians (1836). He thought that the stories of the Nights could serve as an introduction to everyday life in the Middle East. (Never mind about the flying horse, the jinn, the Roc, the magic lamp and the Old Man of the Sea.) His copious endnotes furthered his didactic aim and so did the illustrations. William Harvey, a pupil of Thomas Bewick and one of Britain's leading engravers, did the boxwood engravings, but Lane stood at his shoulder, checking the look of things and providing previously published engravings of Egyptian and Moorish architecture for him to copy. In general, the purpose of the pictures was not to stimulate the imagination or supplement the storyline, but to introduce the British reader to the authentic look of the Arab world. Just occasionally Harvey was licensed to use his imagination, as with his marvellous depiction of the giant jinni in "The Story of the City of Brass", or the battle of magical transformations in "The Story of the Second Dervish".

Dalziel's Illustrated Arabian Nights Entertainments, published in 1865, was the most spectacular illustrated edition to be published in the Victorian age. A number of famous artists were commissioned to produce pictures for it, including John Tenniel, John Everett Millais and George Pinwell. But Arthur Boyd Houghton, a less well-known illustrator, produced the most compelling and atmospheric images – masterpieces of Victorian book illustration. Although his pictures have an authentic oriental look, the orient they conjure up owes more to India than the Arab world, for Houghton had spent his childhood in India and had relatives in the Indian army.

Though selections of the Nights whose texts were designed to be read by children had been published from the late 18th century onwards, little thought had been given to what sort of illustrations might appeal to children. Walter Crane (1845-1915) was one of the first to illustrate stories from the Nights in colour and also one of the first to consider the visual tastes of children: "Children, like ancient Egyptians, appear to see things in profile, and like definite statements in design. They prefer well-designed forms and bright frank colour. They don't want to bother with three dimensions. They can accept symbolic representations. They themselves employ drawing . . . as a kind of picture writing and eagerly follow a pictured story." Crane did not merely illustrate books; he designed them in such a way that there would be a perfect match between text and image. His Aladdin's Picture Book (1876) is ravishing and, since Aladdin's story is, however notionally, set in China, he drew on Chinese and Japanese imagery.

Lane's translation of the Nights, while certainly scholarly, had been excessively prudish, as Lane excised stories and incidents with erotic content. When Richard Burton produced his translation from the Arabic in 10 volumes with six supplementary volumes (1885-8), he went to the opposite extreme and not only kept the sex scenes in but exaggerated them, and he produced extensive notes on such matters as homosexuality, bestiality and castration. The first edition of Burton's translation, which was published for subscribers only so as to lessen the danger of being prosecuted for obscenity, had no pictures, but soon after his death in 1890, a young friend and devoted admirer of Burton, Albert Letchford, produced 70 paintings which served as the basis for the illustrations in a new edition of Burton's translation that was published in 1897. Letchford had trained in Paris as an orientalist painter and he had spent time in Egypt. While hardly a great artist, he did share Burton's taste for the erotic and so nudes feature frequently in the illustrations. Moreover, he had a taste for the fantastic and some of his demons and temples are very weird indeed. He was shy and no businessman and consequently he was usually poorly paid. While still a young man, he contracted a disease in Egypt from which he later died in England.

These days adult fiction is rarely illustrated, but in the 18th and 19th centuries it was normal, and novels by Trollope, Surtees, Dickens and other much less well-known writers carried pictures. But towards the end of the 19th century, for reasons which are not clear, adult novels were no longer illustrated as a matter of course and illustrators found themselves restricted to working mostly on children's books. In the opening decade of the 20th century, gift books aimed at children became fashionable. They were expensively illustrated (and referred to by the historian of children's literature, Brian Alderson, as "cocoa-table books"). The colour plates on shiny paper were usually covered by protective sheets of tissue paper."
Posted by Michael Lundell at 9:21 AM No comments: