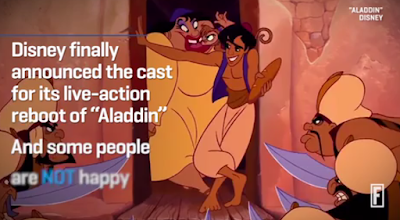 Disney's live action version of its animated 1992 Aladdin is currently in production. Recently, the company announced who would be playing the various parts and it has provoked some controversy. In 1992 groups in the US and elsewhere pressured Disney to change the animated film because of its lyrics and portrayals of the "East" and some parts of the movie and its lyrics were changed after its initial release.

That did little to erase what many saw as Disney's continued misrepresentation of race and culture.

This Fortune.com opinion piece by Germine Awad aptly highlights some of the critical viewpoints that have been levied against the upcoming live-action version:


How Disney Blew a Huge Opportunity While Casting Aladdin - http://fortune.com/2017/07/21/disney-aladdin-cast-naomi-scott/

"With the recent backlash in Hollywood surrounding the casting of white actors to play characters of color, Disney went to great lengths to mount a large-scale, worldwide search to find culturally appropriate actors for the live-action reboot of Aladdin. Reportedly, more than 2,000 actors read for the parts of Jasmine and Aladdin. The process resulted in Mena Massoud, a Canadian Egyptian, being cast as Aladdin; and Naomi Scott, a woman of British and Indian heritage, landing the role of Jasmine. The casting call included a search for actors of both Middle Eastern and Indian descent, presumably to widen the net of potential actors that could realistically depict Middle Easterners.

There is a psychological concept that explains this phenomenon called the outgroup homogeneity effect, where majority group members see the uniqueness and individuality within their own group, but see minority group members as homogeneous. In other words, the majority views the minority as all being the same.

In a climate that includes Muslim bans and general anti-immigration rhetoric, children of Middle Eastern descent are constantly bombarded with negative messages about Middle Easterners. Author and lecturer Jack Shaheen documented the longstanding negative media portrayals of Arabs in films and television. He noted that Arab characters tend to be terrorists; passive, oppressed women; rich oil sheiks; or brutes."

Posted by Michael Lundell at 5:41 PM No comments: