Spielberg's Munich and the Nights 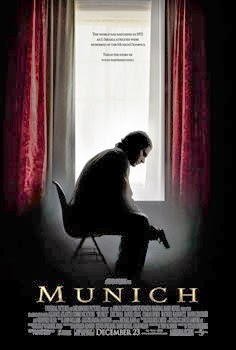 Steven Spielberg's film Munich (2005) also contains references to The 1001 Nights (why not!). I couldn't find a clip of the particular scene. The movie, about a group of Israeli assassins targeting and attempting to kill 11 people throughout Europe and Lebanon and elsewhere, tries to complicate notions of country/government/revenge. The group's targets, according to Israeli intelligence, were all part of the 1972 Olympic killings of Israeli athletes. The movie is based on real events.

The group's first target is Wael Zwaiter (aka Zuaiter - http://en.wikipedia.org/wiki/Wael_Zwaiter) in Rome. Zwaiter was a Palestinian translator working for the PLO and the Libyan Embassy who was also translating the Nights into Italian. The film shows Zwaiter at a cafe in Rome giving a lecture about the Nights and storytelling before heading to his apartment building and being shot in front of an elevator inside.

The real life Zwaiter was killed while holding a copy of the Nights. He did not finish his Italian translation. In the film his lecture was also a book reading of his finished product, however.

Here is the sequence of his killing (no mention of the Nights here though):


Zwaiter is also considered by some to have been wrongly targeted and to have had no connection with the 1972 Oympic killings.

Here is a video (in English) about him and his killing, it shows the copy of the Nights he had with a bullet hole in it (looks like the Bulaq version):

Posted by Michael Lundell at 11:01 AM No comments: