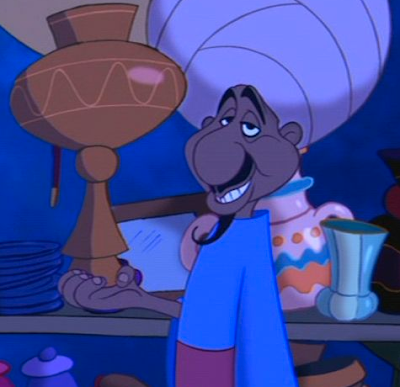 Disney has apparently issued a bunch of press releases to the media to tout their new Aladdin: Diamond Edition on digital, Disney Movies Anywhere and Blu-Ray.

The following "news" from E! reveals that the racially problematic introductory character of the film was actually the genie in disguise. The directors/producers were going to reveal this at the end of the film but, according to the article, it seems they forgot about it.

They were also going to set the film in Baghdad. Due to the Gulf War, they changed it to the "fictional" Agrabah.

Anyway, you can read more of the press release here - http://www.eonline.com/news/706200/disney-myths-debunked-by-ron-clements-and-john-musker-directors-of-the-little-mermaid-aladdin-and-hercules

Here are some quotes from it (I like the heroic notion of Roy Disney saying no! We cannot have this film set in Iraq! Like it's some kind of major cultural event for the world.):

"According to Musker, composers Howard Ashman and Alan Menken's original version had been set in Baghdad, Iraq. "We kept it Baghdad in our first treatment, and then the Gulf War happened—the first Gulf War. Roy Disney said, 'This can't be in Baghdad.' So, I took letters and did a jumbled anagram and came up with Agrabah," he explained. "We came up with a few alternates. But no, we never thought it was post-apocalyptic, futuristic or in some other time.""

Clements, however, did confirm one longstanding rumor. "I saw something that speculates that the peddler at the beginning of Aladdin is the Genie. That's true!" he said. "That was the whole intention, originally. We even had that at the end of the movie, where he would reveal himself to be the Genie, and of course Robin did the voice of the peddler. Just through story changes and some editing, we lost the reveal at the end. So, that's an urban legend that actually is true."

Posted by Michael Lundell at 9:21 AM No comments: