Here is the 1996 Drum and Bass single Arabian Nights by J Majik (http://en.wikipedia.org/wiki/J_Majik).

Posted by Michael Lundell at 7:25 PM No comments:

Here is a video of someone walking up to the tomb of Nights translator Richard F. Burton in Mortlake, London, England.  As you can see (only briefly at the end of the video) the tomb is in the style of an Arabian tent.

Many thanks to JC for passing on this Christie's auction to me.  Unfortunately I took so long to post it it has ended (ended on 9/15/10).  I'm pretty sure though anyone who would be willing to spend 200K UK on these paintings would have known about it already!

The auction's details are quoted below with some background on the Nights.

Book version history from JC:  "The Chagall Four Tales from the Arabian Nights has been reproduced a couple of times.  The original publication was in 1948 by Pantheon Books of New York.  There were two states, a deluxe edition of 21.  It was numbered I-X and lettered A-K.  Each portfolio contained 13 signed lithographs along with text and line drawings.  The pages were loose.  The other state is the numbered and signed edition of 90 lithographs.  Only 12 of the litho's were included in this set.  This is the set Christie's has up of auction.

In 1988 Prestel of Munich reproduced the litho's and text.  All 13 lithos are included along with the line drawings.  I believe that they had previously released the book in German in 1987.  In 1999 the book was released again, in a reduced size.  The 1988 version is the one to have as the reproductions are larger than the later book's. "

Lot Description
Marc Chagall
Four Tales from the Arabian Nights (Mourlot 36-48; Cramer books 18)
the complete set of 12 lithographs printed in colours, 1948, on laid paper, each signed in pencil, inscribed with the plate number and numbered 70/90 (there was also a deluxe edition of ten with an additional plate and progessive proofs of the lithographs, and 11 hors commerce-copies), published by Pantheon Books, New York, 1948, the full sheets, most with deckle edges at right, generally in very good condition, framed
L. 375 x 280 mm. (and similar), S. 430 x 330 mm.

Special Notice
VAT rate of 5% is payable on hammer price and at 17.5% on the buyer's premium.


Lot Notes
The Arabian Nights, more accurately known as One Thousand and One Nights, is a collection of Middle Eastern and South Asian stories and folk tales compiled in Arabic during the Islamic Golden Age. The work as we have it was collected over many centuries by various authors, translators and scholars across the Middle East and North Africa. Though the oldest Arabic manuscript dates from the 14th century, scholars generally date the collection's genesis to around the 9th century.

The main frame story concerns a Persian king and his new bride, Scheherazade, who tells a succession of stories, night after night, in an effort to postpone the threat of execution. The tales vary widely: they include historical tales, love stories, tragedies, comedies, poems, burlesques and various forms of erotica. Numerous stories depict djinns, magicians, and legendary places, which are often intermingled with real people and geography, not always rationally. Sometimes a character in Scheherazade's tale will begin telling other characters a story of his own, and that story may have another one told within it, resulting in a richly layered narrative texture.

Marc Chagall, arguably the pre-eminent colour lithographer of his age, began his relationship with the medium in Four Tales from the Arabian Nights. As in his later illustration series, Chagall conceived the pictures as augmentations of the text, serving to arouse the interest of both the reader and the viewer. It has come to be regarded as one of his finest essays in the medium of lithography, in large part because the literary source required no change in the artist's style. Chagall found himself confronted by a text which inspired and responded to his art like no other."
Posted by Michael Lundell at 12:43 PM No comments:

Here in California there is a prominent Bail Bonds company called Aladdin. It's a fitting name I guess, like the genie they can get you out of jail?

Posted by Michael Lundell at 9:58 AM No comments:

Came across (thanks to Paul!) this upcoming graduate level course on the Nights at California State University Northridge taught by Dr. Charles Hatfield.

It looks like a great overview of the Nights and includes a lot of fun stuff like films and graphic novels as well as the academic stuff. The website has a lot of info and a good looking bibliography as well.

Here is the link:

http://the1001nights.wordpress.com/open-o-simsim/
Posted by Michael Lundell at 11:35 AM No comments:

This week is Arabian Nights week on Restaurant City, the online, possibly (not sure myself) Facebook only, pseudo-virtual reality restaurant game. 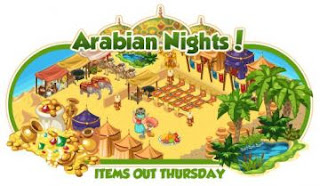 It's kind of a cash game which starts as free but if you want to add as many bells and whistles as you can (for your own gratification) you can but it will cost you cash, most of the Arabian Nights gear and most of the any special week gear costs real money, though the game can also be played for 'free', (but not with the really cool add-ons available!).

You can be a certain type of 'class' of person, a warrior, nomad, caravan master, ruffian or sage.

And it looks like you have to contend with Djinn and all sorts of other vaguely Nights-related elements.

From their website:  "Nadirim is a free-to-play, browser-based, massively multiplayer online role playing game (MMORPG) placed in a fantasy world inspired by the tales of the Arabian Nights. Explore Nadirim and its unique world of Arabian myths and fables to immerse yourself in an online role playing experience that has never been brought to browser platforms before! The game takes the player into the world of the Arabian Nights, a world that is fictional in geographical and historical terms but incorporates the best known elements of Arabian fables and mythology like djinns, adventurous thieves, mysterious princesses, potions, alchemy, and — of course — heroes and villains."

And their cool video: