This one is written and pitched by Kyle Ward. How does one write and pitch I wonder. Seems more lucrative than grading papers somehow, not as cool though, you have to admit.

excerpt: "Universal Pictures is in final negotiations to acquire "Arabian Knights," a property from Blacklight Transmedia and feature scribe Kyle Ward, who is attached to script based on his own pitch.

Story details are under wraps, though the property is described as being radically different from FilmDistrict's "Arabian Nights" pic, which has Liam Hemsworth attached.

Blacklight's Zak Kadison will produce with Brian Grazer and Erica Huggins of Imagine Entertainment, while Eric Lieb will exec produce. Jeff Kirschenbaum and Kiska Higgs will oversee the project for Universal.

Studio previously acquired Ward's spec script "Fiasco Heights," which is set up at Platinum Dunes. Ward also wrote "Kane and Lynch" for Lionsgate and "Hitman 2" for 20th Century Fox. He is currently penning vidgame adaptation "Devil May Cry" for Screen Gems."
Posted by Michael Lundell at 9:26 PM No comments: 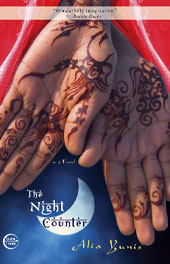 The Night Counter is a new Nights-related fictional novel written by Alia Younis, who teaches at Zayed University in the UAE.
Book website/author blog:  http://www.aliayunis.com/thebook.html
About the book (from the above site):
"Fatima Abdullah has been alive 85 long years, and she knows when her time will come. In fact, it should come just nine days from tonight, the 992nd nightly visit of the beautiful and immortal Scheherazade.
Each night, Fatima has told Scheherazade her life stories, all the while knowing that on the 1001st night, her storytelling will end forever. But between tonight and night 1001, Fatima has a few loose ends to tie up. She must find a wife for her openly gay grandson, teach Arabic (and birth control) to her 17-year-old great-granddaughter, make amends with her estranged husband, and decide which of her troublesome children should inherit her family's home in Lebanon--a house she herself has not seen in nearly 70 years. All this while under the surveillance of two bumbling FBI agents eager to uncover Al Qaeda in L.A.
Alia Yunis unravels four generations of Abdullah family secrets with a great sense of comic timing and a deft touch of magical realism. Touching on the histories of both the United States and the Middle East over the last one hundred years, this is a love story that crosses five generations with wit and warmth."
And here is a review by student Karina Anne Kabbash: http://kkabbash.blogspot.com/2010/11/night-counter.html
Excerpt from the review:
"Recently, I finished reading a fantastic novel by the name of The Night Counter. The fiction begins on the 992 night of storytelling by Fatima Abdullah, a Lebanese-immigrant-grandmother, to Scheherazade, the immortal storyteller from The Arabian Nights. Over the course of nine days, Fatima shares the stories of her home in Lebanon and of her life in the United States, until the 1001 night, the night her storytelling ends forever. Scheherazade brings Fatima’s stories to life by searching out the characters within them and following them for a day or two. Through Fatima’s tales and Scheherazade’s journeys, the reader is awarded a wonderful glimpse into life of an Arab immigrant to the Untied States and her struggle to reconcile her Arab self within American society, as well as the cultural changes that occur across generations in an Arab-American family."
Posted by Michael Lundell at 12:06 PM No comments:

I've written before (check Labels on the sidebar for "urban spaces" or "opa locka") about the city of Opa Locka, Florida, USA.  It is an economically depressed urban area with a history interestingly related to the Nights, several government buildings are built in "Eastern" styles and many of the streets have Nights-related names.

Now a film is being made about the city by French filmmaker Armand Morin.

I've quoted from The Miami Herald below.  Complete Article link is here:  http://www.miamiherald.com/2011/05/03/2188131/french-filmmaker-producing-documentary.html

"The documentary is expected to be released in June and is scheduled to appear in the Panorama 13 film festival in the northern French city of Lille. The city will receive free copies by June 2011 and will schedule a screening."

Special to The Miami Herald

"Opa-locka’s Moorish architecture evokes tales of the Arabian Nights. But the neighborhoods surrounding the historic district reflect the harsh realities of residents who face unemployment and high crime rates.

This contrast was what drew Armand Morin, a French filmmaker, to direct Opa-locka Will Be Beautiful.

“I have been fascinated by two things: the history of this Moorish architecture and the fact that the community goes beyond this heritage and has to struggle with everyday challenges,” Morin said.
Through the voices of Opa-locka leaders and residents, the 30-minute documentary produced by Le Fresnoy connects the Arabian-themed roots of the city with the urban society of the present time.

In the first scene, a voiceover narrates how aviation pioneer and 1920s developer Glenn Curtiss founded the city inspired by the Arabian Nights. Following Curtiss’ fantasy, architect Bernard Muller designed buildings and houses that resembled the Arabian architectural style. According to University of Miami architecture teacher Jean-Francois Lejeune, the Opa-locka City Hall was once the center for Arabic festivals.

Lejeune also explains that Opa-locka was first built as a leisure place. The city featured a golf course, a zoo and a swimming pool. However, through the years, Opa-locka began to lose its leisure spaces and became a more urbanized place.

Now, far from the Arabian fantasy, Morin found a society that struggles with a rough economy and high crime rates.

"The city has a problem with crime and drugs. I think this is a problem of education and professional opportunities for the people," Morin said.

Even though the Arabian dream died a long time ago, the desire for change is still in the residents’ minds, especially in Opa-locka Community Development Corporation CEO Willie Logan’s mind, Morin said.

"You can see that this idea of having a vision for the city has always been very important. From Glenn Curtiss’ Arabian fantasy to Logan’s more pragmatic plan," Morin said.

Morin said that Logan intends to preserve the history, industry and architecture of the city, while at the same time improving the neighborhoods’ facades."
Posted by Michael Lundell at 12:44 PM 1 comment:

Interpreting The 1001 Nights for the Stage - Tim Supple

Tim Supple was in Abu Dhabi recently and gave a presentation on the Nights at NYU Abu Dhabi's new campus.  He is the director of the Luminato project, a massive staged version of the Nights featuring actors from around the Middle East.

The presentation covers his adaptation of the Nights and some of the stories being read by various people.  As an aside, I am anxiously awaiting the results of a phone interview for a position at NYUAD.  This waiting period is stressful...!

Interpreting The 1001 Nights for the Stage
Stage director Tim Supple’s love of dramatic story-telling began at an early age and developed into a professional reputation for adapting plays, books, stories and poems into highly visual, musical and imaginative theatrical events. Before performing some brief illustrative rehearsal sketches, Supple will discuss his work on the adaptation of The Arabian Nights for the stage.

Posted by Michael Lundell at 9:55 AM No comments:

Jennifer Egan: What I Read

Thanks to T. Papa for passing this Nights-find along.  Jennifer Egan, winner of the 2011 Pulitzer Prize for her novel A Visit from the Goon Squad, is, according to this interview, in the process of working through reading the Nights with her son, gory bits and all.  I wonder which version she is using?!

Here's the link to the interview, from The Atlantic Wire's series "What I Read":  http://www.theatlanticwire.com/business/2011/05/jennifer-egan-what-i-read/37208/

And the relevant snippet:

"If I do take the kids to school, I'll read to my younger son after we drop off the elder. For the past month or so, we've been reading the Arabian Nights, which is quite bloody and rash—we both love it. That is often the first thing I'll read in the morning on those days. Walking home from school takes 15-20 minutes, and I always listen to my iPod while walking, in part to distract me from the grocery bags I'm often lugging by that time. My morning music choices tend to be, let's say, energizing rather than sophisticated:  this morning it was a couple of Lady Gaga hits from last summer:  "Telephone" and "Let's Dance."  If a song is putting me in the right mood, I'll often just repeat it the whole way home."
Posted by Michael Lundell at 9:54 PM No comments:

Email ThisBlogThis!Share to TwitterShare to FacebookShare to Pinterest
Labels: 21st

Thanks to Paul for passing this info along.  Noted poet and author Andrei Codrescu's forthcoming book is related to the Nights, here is the info from the publisher's website:

" Whatever Gets You through the Night:

A Story of Sheherezade and the Arabian Entertainments
Andrei Codrescu
Cloth | June 2011 | $22.95 / £15.95
196 pp. | 7 1/2 x 9
e-Book | June 2011 | $22.95 | ISBN: 978-1-4008-3801-1
"I fear each passing night that I will not receive my maintenance dose of suspense, and then I will cease to exist."--Whatever Gets You through the Night
Whatever Gets You through the Night is an irreverent and deeply funny retelling of the Arabian Nights and a wildly inspired exploration of the timeless art of storytelling. Award-winning writer Andrei Codrescu reimagines how Sheherezade saved Baghdad's virgins and her own life through a heroic feat of storytelling--one that kept the Persian king Sharyar hanging in agonizing narrative and erotic suspense for 1001 nights. For Sheherezade, the end of either suspense or curiosity means death, but Codrescu keeps both alive in this entertaining tale of how she learned to hold a king in thrall, setting with her endless invention an unsurpassable example for all storytellers across the ages. Liberated and mischievous, Codrescu's Sheherezade is as charming as she is shrewd--and so is the story Codrescu tells.
Andrei Codrescu is an award-winning poet, novelist, essayist, and NPR commentator. His recent books include The Posthuman Dada Guide and The Poetry Lesson (both Princeton).
Endorsements:
"Like a supercomputer concealed inside an exotic, aphrodisiac fruit, Codrescu's retelling of this ancient bawdy wonderwork ends up by surprisingly calculating the future of our race."--Tom Robbins, author of Even Cowgirls Get the Blues
"This extraordinary rewriting of the Arabian Nights is a tour de force. Andrei Codrescu writes with verve, eloquence, and a fervent imagination."--Jack Zipes, adapter of the Signet Classics Arabian Nights
"This is a masterpiece of storytelling that could find its place alongside the fairy-tale works of Angela Carter, Robert Coover, and Salman Rushdie. Andrei Codrescu gives readers a new and highly entertaining experience of Sheherazade and the Arabian Nights."--Donald Haase, editor of Marvels and Tales: Journal of Fairy-Tale Studies
"Andrei Codrescu's brilliant retelling of the Arabian Nights is of the same caliber as Borges's Ficciones. A pleasure to read, it has the lightness, strength, and sparkle of a spider's web."--Cristina Bacchilega, author of Postmodern Fairy Tales"
website:  http://press.princeton.edu/titles/9392.html
Posted by Michael Lundell at 11:32 PM No comments: