Robert Irwin - Visions of the Jinn: Illustrators of the Arabian Nights

Gerard Genette’s term “paratext” is an interesting one when thinking about all of the elements that constitute a book/text/object.

A paratext is any associated part of that text that is not directly its narrative but instead works to present the text in a certain way.

Paratexts include titles, covers, font, introductions, attached essays, pictures and illustrations, even interviews by the author or publisher about the book – a kind of marketing of the text, for some reason, by its paratext.

A text like the Nights certainly seems like a book embedded in several paratextual layers.  Richard Burton’s paratextual addtions, for example, especially his incredibly numerous footnotes and essays, presented the Nights as a "true" picture of the people of the “Middle East,” even though they largely were not a true picture of anywhere.

An important paratextual amendment to many versions of the Nights are its pictures - accompanying illustrations - and Robert Irwin’s book Visions of the Jinn sheds some light on the illustrators responsible for visually representing what the Nights seemed to be about.

Like the translators of the Nights, everywhere and anywhere, these illustrators had vastly different conceptions of their object of study.  And like any writing or historical document these pictures also seemed to say something about the time period and place they were borne out of.

Robert Irwin is the author of several contemporary works on or about the Nights including the well known Nights-history book The Arabian Nights: A Companion.  His latest book, Visions of the Jinn:  Illustrators of the Arabian Nights (2010)  provides both a great overview academically of the subject and also a great introduction to a general audience to the splendor of the visual Nights.

Irwin gives an overview of many of the illustrators of the many different variants of the Nights over the years.  Some interesting stand-outs include:

William Harvey (1796-1866) who made over 500 illustrations for Edward William Lane’s English translation, and, according to Irwin, it was “Harvey’s illustrations, rather than Lane’s text, that attracted the most attention and praise” (65).

Also, according to Irwin, Harvey’s illustrations were the first serious attempt at rendering a truthful anthropological/architectural visions of the Middle East in the Nights, something which certainly changed the character of the Nights forever in its 19th century European variants.

Much attention is given, as well, to Edmund Dulac, early 20th century illustrator who incorporated a great deal of color and expressionism in his renderings, and a ton of information about the many different illustrators it can feel a bit overwhelming.  In addition there isn’t much information about the various countries represented and how much of an international work the Nights is.

In the book movements from print to engraving to color are all covered.  Different artistic styles based either in classical visual arts or popular culture depictions such as comic books are also given some attention.  There are scores of artists, many relatively still unknown, and the book as a whole can feel a little scattered due to the amount of content and the breadth of its topic.  Given that it appears to be one of the first studies to address the illustrators of the Nights, however, this is to some extent forgivable.  Each artist of the Nights could easily have their own book, just as each version of the Nights has its own incredible biography as well.

I’ve seen other reviews of this book that feature digital pictures but I don’t think the pictures these reviews have are from Irwin’s book itself, if they were they would have looked much better.

The book is a part of a series based around the collection at the Arcadian Library, a private library in the UK holding one of the world’s best collections of the Nights.

I think this book is a must-have for any serious library at any research institution, any researcher or fan of the Nights, and it would make a good gift as well for anyone interested in art or literature.  It is a large coffee-table sized book with 240 pages.

Its price, at over $200 new, however, will undoubtedly limit its reach, however most comparable visual arts books are priced typically over $100 if not more, so it’s not completely out of the ballpark.

Posted by Michael Lundell at 1:22 PM No comments: 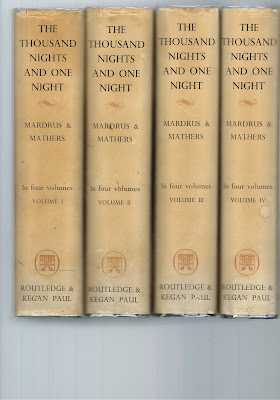 Check out this website featuring online audio versions of the poetry from the Mardrus/Mathers version of the Nights:  http://theinfosite.org/1001/index.html

Each poem is linked separately and read aloud in great quality audio.

I had the great pleasure of having several cups of Arabian coffee with my new acquaintance Yousef last week.  Yousef has opened an art gallery here in San Diego on Ray Street, North Park's art district, and it has a distinctly Nights based theme.

Yousef has a great collection of Nights related books for sale, but has also exhibited many of his art pieces, which are flavored with the Nights and with Arabian history as well, Yousef is in part from Jeddah, Saudi Arabia.

So, right here in San Diego we have our own Saudi Arabian/1001 Nights art gallery, Ahlan wa Sahlan!

I encourage everyone to visit, either by appointment or during the monthly "Ray at Night" event held on Ray Street (for more info on this:  http://raystreet.com/).

Yousef is also at work making Arabian Lounges - Arabic style couches for relaxing forever on chatting and hanging out, something everyone in the world needs more of.

You can check out some of his artwork online, and also find info on his gallery, at his website:  http://www.ousfaughn.com/

Posted by Michael Lundell at 9:32 PM No comments: