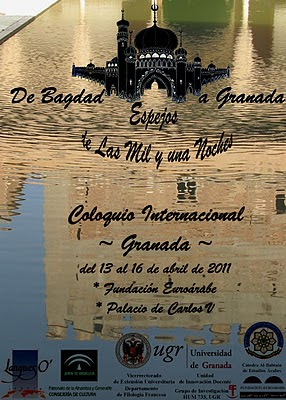 This is an upcoming conference in Granada, Spain with lots of interesting sounding panels and papers.  It is organized by Aboubakr Chraïbi, INALCO, Paris and Nathalie Bléser, U. de Grenade.

What a nice place for a Nights conference!

Most of the papers are in French, though a few are in English and Arabic.

You can find the whole program (mostly in French) here:  http://www.inalco.fr/ina_gabarit_article.php3?id_rubrique=2640&id_article=4879&id_secteur=1 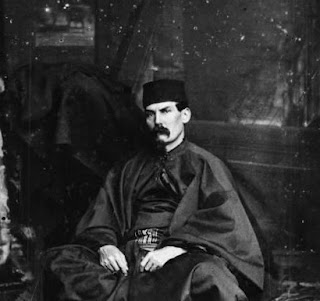 I chanced upon several letters in the Appendix of Volume 4 of Burton's Supplemental Nights which throw light on the situation he faced when he was in the process of translating his Nights.

He wanted to have the copy of the Wortley-Montague manuscript sent to him at the India Office from the Bodleian Library at Oxford but the board members at the library were refusing, despite Burton's insistence that he was not going to translate the racier passages or stories.

This may explain why ultimately there are several stories in the Wortley-Montague (including "Ali and his Large Member" of my previous post here: http://journalofthenights.blogspot.com/2011/03/ali-and-his-large-member.html) that Burton did not translate.

He also mentions the incident in the preface to the edition.  It's in my Volume 4 but may be in different volumes depending on which edition you are looking at, the initial set of his translations from the Wortley-Montague.

He tried to have a student who didn't know Arabic at Oxford copy the manuscript for him (like drawing the same characters without knowing what they said), but the student quit after a few days!

He eventually had someone photocopy (or the equivalent?) the manuscript for him and send it to him.  Ali and his large member is MIA however.  I'll have to check the 1995 German edition of the manuscript to see if Ali is there.   I have been officially sidetracked, though not completely off my own tracks.  Studying the Nights is truly like digging in the sand.

Many thanks to Jamie at USC for the question.

There is another English edition by Jonathan Scott translated before Burton which also includes stories from the Wortley-Montague but which, and I'm not certain here and only relying on Burton's notes so far, seem to be edited for cleanliness and not to contain an extensively translated amount of stories either.

Burton's letters are interesting to read in this volume.  He's quite upset with the library and ends the Appendix A of this volume with a scathing indictment of Oxford in general!

Some snippets from his letters:

"I may note that the translated tales (as may be seen by Scott's version) contain nothing indelicate or immoral; in fact the whole MS. is exceptionally pure.  Moreover, the MS., as far as I can learn, is never used at Oxford" (281).

"I am acquainted with many of the public libraries of Europe, but I know of none that would throw such obstacles in the way of students" (282).

The reason for the story not being translated by Burton, however, may not be related to the incident with the Bodleian after all.  As I look at Volume 5 I see his rebuttal to the library's refusal of lending the manuscript to him.  He writes to them that, because of their refusal, he's now going to put in all of the racy material, even overdoing it!

He also dedicates the Volume to them:

"TO THE CURATORS OF THE BODLEIAN LIBRARY, OXFORD:  Especially REVD. B. PRICE and PROFESSOR MAX MULLER."

He writes to them:

"Gentlemen,
I take the liberty of placing your names at the head of this Volume which owes its rarest and raciest passages to your kindly refusing the temporary transfer of the Wortley Montague MS. from your pleasant library to the care of Dr. Rost., Chief Librarian, India Office.  As a sop to "bigotry and virtue," as a concession to the "Scribes and Pharisees," I had undertaken, in case the loan were granted, not to translate tales and passages which might expose you, the Curators, to unfriendly comment.  But, possibly anticipating what injury would thereby accrue to the Volume and what sorrow to my subscribers, you were good enough not to sanction the transfer - indeed you refused it to me twice - and for this step my Clientele will be (or ought to be) truly thankful to you.

I am, Gentlemen,
Yours obediently,
RICHARD F. BURTON

Ali and his Large "Member"

A visitor has asked me an interesting question, they are interested in the story "Ali and his large member" (yes that kind of member), but I don't know too much about it.

I did some very minor looking around and this is what I came up with, I'll have to double-check my Burton but I think he didn't translate all of the stories from the Wortley-Montague manuscript, although this one seems like something he may have been interested in taking a look at.

It's only in the so called Wortley Montague manuscript, not found in any other version before it.  This was published in, or dated to 1764, according to the Arabian Nights Encyclopedia.

This (Arabic) manuscript is in the Bodleian Library.  It's not a translation and has Wortley-Montague's name attached to it because he owned it.

There is  a German translation of the Nights from this manuscript by Felix Tauer that may contain this story, according to the Encyclopedia.  I think the title is Neue Erzählungen aus den Tausendundein Nächten.


Apart from that there doesn't seem to be any other mention of the story in any other version of the Nights.

Anyone else know something more/different?

I came across this while browsing some other related topic (the original topic I've long forgotten!).  Perhaps where you end up is just as well as where you begin.

It is a short essay with references to the Nights by Henry James Pye, from 1792. (http://en.wikipedia.org/wiki/Henry_James_Pye)

Its title is "Note to Aristotle's Poetics" and I found it at this website on English poetry:

"EVEN IN THE EPOPEE THE FABLES SHOULD HAVE A DRAMATIC FORM, AND RELATE TO ONE ENTIRE AND COMPLEAT ACTION, WHICH HAS A BEGINNING, A MIDDLE, AND AN END.
It has been already observed that in every fictitious tale, independently of technical rules, it is impossible to keep up the attention and interest of the piece without confining the time of the fable within a certain boundary. This rule of nature is confirmed by the practice of all our good novel writers. I will not only instance the novels of Fielding, who as being a scholar, and rather fond of shewing he was, may be supposed to display his acquaintance with the precepts of the Stagirite, or rather the models from whence they are drawn: but those of Richardson, of Mrs. Smith, and of Miss Burney, who cannot be supposed to be influenced by any pedantry of this kind. Even in those novels which are written on what Dr. Beattie calls the historical plan, such as Peregrine Pickle and Roderick Random, though they begin with the infancy of the hero, they by no means compleat his life. The first events are rather preparatory to, than part of the main object of the story, the body of which, or to speak dramatically, the plot, is the love of the principal characters, as the solution of it, or catastrophe, is their marriage.
The mode used by the orientals to give a species of unity to their complicated fables is very singular. Of this the Arabian Nights exhibit a curious specimen. A general story, or ground-work for the whole, is first formed. This is the bloody vow of the sultan in consequence of the sultana's infidelity, the generous resolution of the vizir's daughter, and her final triumph. Into this the other stories are woven, but the introductory tale is continually brought to our recollection by the conversation that precedes the narrative of every night. Every story is besides branched out into a number of others, to each of which it serves as a common bond of union, as the original one is to the whole.
By this strange contrivance an appearance of general unity is kept up without the least of that effect which is proposed as the consequence of unity; as the mind is disagreeably perplexed by the broken chain of the narrative, expectation is suspended till all interest in the fable is lost, and instead of perspicuity confusion is produced. This arrangement is preserved in the first half of Mr. Galland's translation. In the latter part he has given such separate stories as struck him, without dividing the nights, or preserving any connexion between them, except the catastrophe of the leading fable. Mr. Andrews in his Anecdotes, gives a humorous reason for M. Galland's change of conduct. But I believe the principal cause of it was the length of the original work, which he has greatly abridged, as will be apparent on comparing the number of nights in that part of his translation where they are noticed, which is a full half of his work, with the compleat number of a thousand and one.
Dr. Beattie seems to question the authenticity of this work. I think the reason he urges; (the French features given it by M. Galland,) can have no weight with a person who has ever read a French translation from any language. Whoever will compare this work even through the medium of a French translation with the many WESTERN oriental tales, to which it has given birth, will see strong marks of original and real character. But I believe the authenticity of this work is capable of stronger proof. I have been informed that Professor White has a compleat copy in Arabic. Mr. Richardson also, in his Arabic Grammar, has printed one of the fables at length in the original language, and quoted verses from another which are not translated by M. Galland, though the tale from which they are taken is.
This mode of narration was adopted by Ariosto, and was copied from him by our countryman Spenser.
As for Ariosto, his imagination is so brilliant, his subject so wonderfully varied
From grave to gay, from lively to severe:
there is such a mingled vein of sublimity, and humour, running through the whole work, that notwithstanding the many absurdities it contains, and such a total want of connexion in the incidents, that to enable the reader at all to follow the thread of the scattered tales, the commentators have been obliged to have recourse to inartificial assistance or marginal references; yet we can hardly wish it to have been in any respect different from what it is. But as the work of Spenser is entirely of a serious cast, our taste is more fastidious, and indeed the attempt at uniformity, which is avowed by the author, causes us to be more disgusted both with the want of it in the Cantos that are preserved, and the apparent inadequacy of the whole plan proposed, had it been compleatly carried into execution. The unity produced by the introduction of a general kind of secondary hero pervading the whole, must have been very awkward and very uninteresting. Prince Arthur engaged as an assistant to the several allegorical heroes in their respective adventures, would have exactly resembled the pentathlete, as described by Plato, who, however skilful he might be in the contest with those who like himself were trained to the practice of various exercises, was always inferior to those athletes who applied themselves to one only, in that particular exercise."
Posted by Michael Lundell at 1:35 PM No comments:

Email ThisBlogThis!Share to TwitterShare to FacebookShare to Pinterest
Labels: 18th, mentions of the nights, online articles

Recollections of the Arabian Nights - Tennyson

Here is the poem "Recollections of the Arabian Nights" by English poet Alfred, Lord Tennyson. Originally published in 1830. More on Tennyson: http://en.wikipedia.org/wiki/Alfred,_Lord_Tennyson