Here is a review of Marina Warner’s Stranger Magic, a new Nights book I recently mentioned. This review is from The Daily Beast and is written by English Professor Brad Gooch, well written for the most part (though is "Palestinian-Arab" really a necessary, if correct, adjective for Edward Said? Maybe the author meant "Palestinian-American," which Said was? Arab-American?), if a bit of a cursory overview of Warner's book.

I've excerpted some passages below, the entire review is here: http://www.thedailybeast.com/articles/2012/03/25/marina-warner-s-stranger-magic-reconsiders-the-arabian-nights.html

"Long before meta-fiction, blog fiction, expropriation, or hypertext, there was Shahrazad, the slinkiest, sexiest, most ineradicable trickster in global literature, telling stories every night towards the event horizon of 1001 Nights to distract her abusive husband, the Sultan, from his resolve to behead each of his wives for infidelity—while her sister curled beside them on the divan, like a kinky teleprompter, or laugh-sigh-gasp track. The result, Tales of a Thousand and One Nights, or Arabian Nights, as it became known after its first English translation, in 1706, kicked off a craze of Orientalism that morphed across supposedly rational Enlightenment Europe in spoofs, follies, turqueries, pantomimes, and lots of camping it up in djellaba, or lounging on “ottomans.” Some of its signature tales—Aladdin’s lamp, Sinbad’s voyage, or Ali Baba’s thieves—were likely only smuggled into the text later by French translator Antoine Galland, spun by him from mere parentheses of plot in the 14th-century Syrian manuscript he was busily mining."

"The jinni (Arabic for “genie” or “demon”) in the bottle of Warner’s book, both menacing and inspiring, is Palestinian-Arab Edward Said and his paradigm-shifting study Orientalism. When I was a student at Columbia in the late 1970s, I audited Said’s course. He was an academic rock star of the moment, wore elegant dark-blue suits to class; as a snarky student exercise I kept note of the number of times he used the word “power” in every lecture. Orientalism was the equivalent of an academic beach book during in the summer of 1979—a “cult bible,” says Warner. While Said didn’t take on the popularization of Arabian Nights directly, especially as triggered by the “lurid and archaizing” Victorian-era version of Sir Richard Burton, he did take on his ilk, exposing orientalist scholars, adventurers, and explorers as trading in stereotypes of Eastern lassitude, femininity, and deception that helped stoke a colonialist, imperialist agenda.

Enough decades have passed for these ideas to be run through the word processor again, and reconsidered. While Said did not deconstruct Arabian Nights directly, he did indict one of its translators, the English Arabist Edward W. Lane, for fostering prejudice. “Said’s furious polemic against Orientalism,” Warner writes, “has dominated perception of the Nights and related Orientalist literature until now.” She stops along her way to absolve this or that orientalist figure of heavy-handed motives, restoring the impulses of sheer infatuation and curiosity that motivated so many of these Arabophiles from Goethe to T.E. Lawrence to Sigmund Freud, with his divan of a psychoanalytic couch covered with oriental rugs and cushions for Shahrazadian talking cures. Warner trots out Edward Lane as Exhibit A of a “charmed encounter” with the Middle East. A sort of method scholar, Lane lived in Cairo, admittedly dressing in Mameluke robes, while translating the Koran, producing a monumental Arabic-English lexicon, as well as his annotated Nights (1839-41) in three illustrated volumes."
Posted by Michael Lundell at 2:20 PM No comments: 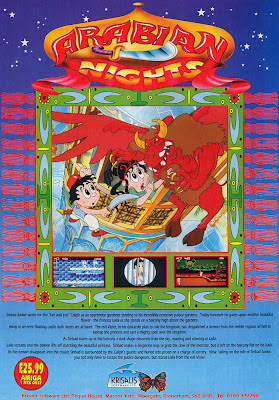 Arabian Nights is a 1993 videogame by Krisilas made for the Commodore Amiga computer. The main character is Sinbad Jr!

From wikipedia (http://en.wikipedia.org/wiki/Arabian_Nights_%28video_game%29): The player controls the hero of the game, Sinbad Jnr, a lowly gardener who witnesses the kidnap of the princess by a dragon. After Sinbad Jnr tries to save her from the flying dragon, he ends up falling back to Earth and becoming unconscious before awakening in a prison accused of sorcery and capturing the woman he tried to save.

Sometimes the gameplay changes significantly. For example, in one level the player is required to fly a magic carpet, and in another he is required to race an opponent on a mine cart through tunnels.

The website lemonamiga.com is an incredible database of pictures, music, game information, scans of reviews and more for all things amiga related: http://www.lemonamiga.com/games/details.php?id=79

Here is a youtube video walkthrough of the game:

Posted by Michael Lundell at 8:31 AM No comments:

Algerian writer Waciny Laredj (http://en.wikipedia.org/wiki/Waciny_Laredj) has a new novel based in part on a critique of dictatorships and on the 1001 Nights.  Thanks to Irfan for passing this along.  Not sure why his name is spelled Laredj in most English transliteration I've seen, the article below has his name as "al-A'raj," which is closer to the Arabic.

Entire article on the conference mentioned below:  http://www.jadaliyya.com/pages/index/4466/the-international-symposium-on-the-arab-spring-thr


"Wasini al-A’raj, the prominent Algerian novelist and university professor, began his lecture by reminding the audience that political discourse is something ephemeral and goes with the wind, but the literary discourse, when genuine, will become a part of the individual memory, and eventually, the collective memory. According to him, the Tunisian Revolution paved the way for other Arab Revolutions and gave literature the opportunity “to express itself.” He raised the following question: “Is literature a reaction or an echo of the revolution, or is the writer just a bearer of a situation and a bearer of a conception?” Al-A’raj suggested that writing is the “soft element” that gives value to humanity. By “soft element,” he meant the writing about the Arab Revolutions without divinisation or glorification or the introduction of a superman. He called on writers to depict an ordinary protagonist, one who gives value to humanity and nobleness. He encouraged writers to express that which others do not, and to be rebels in an exceptional situation. “Now everyone speaks about the revolution,” said al-A’raj, “but nobleness is to say something that the others do not say. Besides, the space of democracy is of paramount importance in boosting the literary work, but the writer must not wait until he/she will be provided with such a space.”

In remembering recent Algerian history, al-A’raj questioned the reason behind the victimisation of about two hundred thousand persons in the nineties. He stated that writers at that time fell under two categories: Those that went hand in hand with the authority, and those that assumed its responsibility. He added, “I wrote the novel Sayyidat al-maqam: Marthiyyat al-yawm al-hazin (Mistress of the Shrine: Elegies for a Sad Day, 1995) to express myself within literature and not inside politics. In my novel Jumlukiyat Arabia (Reponarchy of Arabia), I conversed with authoritarianism and made Dinazade say things that Shahryar did not want to listen to.” Jumlukiyat is a coined term that combines jumhouria, meaning republic, and muloukiat, meaning kingdom.

What is striking about Jumlukiyat Arabia is that it is a parody of One Thousand and One Nights. Wasini al-A’raj’s work dives deeply into the realms of the oriental despotism through the depiction of the Arab dictator in all his facets, through a highly sophisticated artistic and fictional style that draws upon One Thousand and one Nights. The novel essentially gives a powerful voice to women and the marginalized, while denouncing the one-sided vision of the dictator, portraying him as a person who is inept and weak."
Posted by Michael Lundell at 12:10 PM No comments:

A 1001 thanks to JC for the following scans and information on these stamps from Ras Al Khaimah, UAE, which I recently posted about.

JC runs the website - http://www.wollamshram.ca/1001/index.htm - which contains full length versions of many English language translations of The 1001 Nights.

He also has a blog where he posts regularly about the Nights, here:  http://wollamshram.wordpress.com/

He writes:  "The Sindbad stamp is part of a five stamp set.  The others feature scenes from The Fisherman and the Genie, The Ebony Horse, Ali Baba, and one that I can't place.  I believe that the stamps were published in 1967.  Hungary, Mali, Fujeira, Ajman, UK, and the Palestine Authority have all published Arabian Nights themed stamps. This excludes the tons Disney version stamps from Guyana and the Aladdin pantomime stamps from Nottingham.  These are the ones I know of."


Posted by Michael Lundell at 1:48 PM No comments: