Here's a picture of a brochure recently up for sale on ebay for the "Tales of the Arabian Nights" pinball machine. 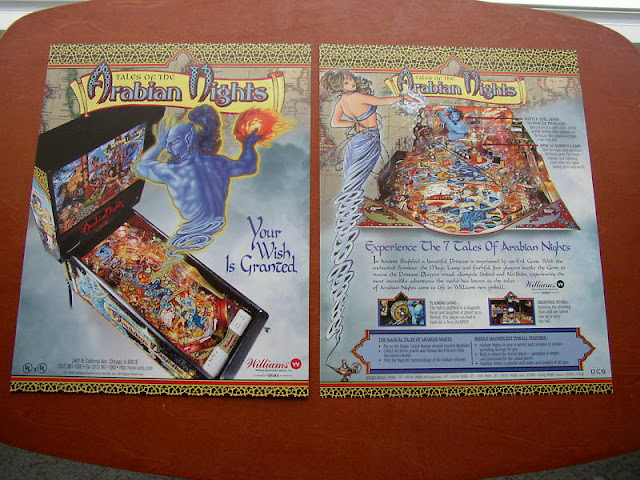 Posted by Michael Lundell at 1:37 PM No comments: 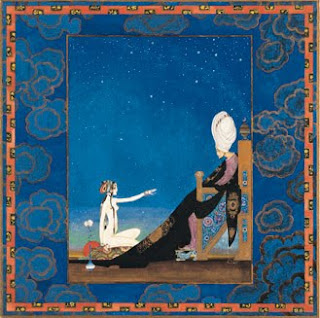 picture:  Scheherazade Telling Tales by Kay Nielsen (early 20th century)
The 1001 Nights Panel
MESA (Middle East Studies Association) 2010
The following is information on a panel I put together for the upcoming (November) MESA conference here in San Diego. I’ll be the chair of the panel. The abstracts for the papers being presented are listed below with their presenters.

Anyone interested in attending the conference and the panel needs to register and you do not have to become a member of MESA but the conference is less expensive if you do (http://www.mesa.arizona.edu/).

Since its introduction to Europe via Antoine Galland's translation in 1704, the 1001 Nights have been a locus for both the construction of and argument about the identity of Islam. The text's composite and suspect creation is, of course, a crucial element in understanding the codification of Islam as an object of Western interest. However, largely dismissed and unexplored is the role of the Nights as a primary source text for the founders of the contemporary academic study of Islam. While derided by some as simple--and therefore ignorable--folktales, scholars from Duncan Black Macdonald to Muhsin Mahdi have held up the Nights as an exemplar for the manners and customs of Muslims and Islam. But "manners and customs" echoes and mimics the colonizing language used by Galland, Lane, and Burton when advertising their translations. We are left, then, with an unusual agreement about the role of the Nights as a representation of Islamic identity, but one that violates our sense of post-colonial politics. This paper will address the contentious role of the Nights in the evolving dispute over who and what speaks for Islam.

This short paper wishes to place the sacred text of Prophetic Hadith as used by famous authorities in Islamic jurisprudence and popular piety next to stories from Alf Layla wa Layla, to study areas of intersection between the two bodies of literature. Through specific focus on the textual identity in both, the paper re-contextualizes Alf Layla within the larger projects sketched by Islamic traditions. This will come as an attempt to denaturalize and bring under scrutiny the process through which the scripture and its interpretation acquire 'timelessness,' and instead will be studied as a discursive practice whose politics are formed through complex intersections with the communities, their beliefs and common practices- all processes articulated in Alf Layla. Both Hadith and Alf Layla will be studied within an understanding that they have constantly shared, exchanged and negotiated themes, techniques, communal beliefs and practices prevalent within the culture that produced both.

Tayib Salih's Season of Migration to the North [Mawsim al-hijra ila al-shamal] stands as a staple of the comparative and world literature canon today, taught frequently in a recent translated edition and the subject of commentary by countless critics. It perhaps rivals A Thousand and One Nights in recent decades as the representative Arabic narrative in today's 'world republic of letters,' to borrow Pascale Casanova's formulation. My paper uncovers how Season of Migration to the North comments on its own incorporation into international syllabi and scholarly discourses by reading the embedded narrative frames of Salih's novel against and through similar narrative precursors in A Thousand and One Nights. As the story of Mustafa Sa'eed dead ends in an empty tome, as closed doors reveal dark chambers full of untold secrets, as wives die or are killed, as stories emerge from stories until we are left without closure and perhaps drowning in the waters of the Nile, my paper situates the story of the story of Mustafa Sa'eed as a narrative contest over the rights and implications of appropriation and revenge. Building upon the work of Nights critics such as Rana Kabbani and Muhsin al-Musawi, in the paper I chart the history of the translation and proliferation of A Thousand and One Nights, and place that history alongside Salih's Season of Migration to the North. What emerges is a macabre recasting of A Thousand and One Nights, that infamous collection of nocturnal tales, as it lends Tayeb Salih's seminal novel both the stuff of Orientalist fantasy and its own history of migrations to the North and back.


Elise Franssen – “The ZER Manuscripts of the Arabian Nights”

In the end of the nineteenth century, the French orientalist Herman Zotenberg defined the 'Egyptian Recension' of the text of the "Arabian Nights"; this group of manuscripts is now known as ZER (for 'Zotenberg's Egyptian Recension'). This classification is based on the the tales, their succession, and the chronological and geographical origin of the manuscripts.
This recension of the text is actually the best known version of the "Nights", since most of the printed editions of the "Thousand and One Nights" are based on a manuscript being part of this group. Thus, this text seems to be well known but amazingly its manuscripts are not. No critical edition or deep study of any them exists. Furthermore, some of the ZER manuscripts actually present similar codicological features, such as their distribution in four volumes, or even the page setting and, sometimes, the handwriting.

A precise codicological study of the ZER manuscripts permits determining if this group is as homogeneous as it appears on first sight or if, on the contrary, if it can be divided into other subgroups. It gives information about the birth context of the group; where were the manuscripts copied? And for whom? Do they all derive from a single copy, the model being respected as far as in the physical aspect of the book? These are some of the questions I will try to answer. The collected codicological information will be compared to the conclusions of the narratological and philological study of each manuscript's text.


Gretchen A. Head – “The Reception of "The Nights" in 19th Century America”

The stories of The Thousand and One Nights have had a strong presence in American culture for over two centuries. The first American edition was published in 1794, and in the 19th century, 140 of the 238 different English editions published were printed in the United States; publishing houses in New York, Philadelphia, Boston, Chicago, and Baltimore issued dozens of different versions for a growing American reading public. Given the wide dissemination of The Nights, two questions should be asked. First, who was reading these stories and how were they interpreted and/or manipulated? And, how have The Nights contributed to the shaping of American perceptions of the Middle East? This paper will address these questions in the context of 19th century America.


- Hope to see a lot of people there!

But the first edition did sell out anyway!

From the article (entirety at the link above):

"CAIRO — Egypt's public prosecutor on Tuesday dismissed a complaint brought by Islamists seeking to ban "Arabian Nights" which they judged to be immoral, the official MENA news agency reported.

Prosecutor Abdel Megid Mahmud threw out the case, saying the epic tales had been published for centuries without problems, and had been an inspiration to countless artists, MENA said.

The case was brought forward by a group of Islamist lawyers after a new edition was published by the government-run General Agency for Cultural Palaces.

They had filed a complaint to the public prosecutor against the publication of the classic "One Thousand and One Nights," known in English as "Arabian Nights," because they said it was lewd.

Mahmud also made reference to a 1985 ruling which allowed the book to be published, saying the latest case brought no new elements.

First published in mediaeval times, the collection of tales including "Ali Baba and the 40 Thieves" is told by Sheherazade to put off her execution by a king who wants to bed his country's virgins before executing them.

In 2003, the head of General Agency for Cultural Palaces was sacked by Culture Minister Faruq Hosni after it published three novels Islamists described as obscene.

In their complaint against "Arabian Nights," an Islamist group of lawyers, calling themselves Lawyers Without Borders, catalogued references to sex which they said "called to vice and sin.""
Posted by Michael Lundell at 10:57 PM No comments:

Many thanks to Martyn for passing this on.  This summer (2010) marks the debut of a new animated series from Canada based on the 1001 Nights.  The animation looks really great and contemporary.  I look forward to seeing what they do with the stories of the Nights as they promise a variety of not-only-Ali Baba-and-Sinbad-Aladdin tales.

The series is aimed at children aged 6-9.

"A new animated comedy series, 1001 Nights is an original show that brings the delightful tales of the famed 1001 Arabian Nights to the screen with hilarity, excitement, and non-stop fast paced action. Filled with exciting stories, vivid animation, wonderful music, and unforgettable characters, 1001 Nights is eye-popping entertainment for both kids and adults. You’ve heard of Sinbad, Aladdin, and Ali Baba? You’ve got 998 more stories to go! 1001 Nights brings them to you in a way that will keep you coming back for more. Join the heroine Shahrzad as she weaves tales of adventure, intrigue, and excitement!"
Posted by Michael Lundell at 11:26 PM No comments: