The blogger Zeinobia at her great blog Egyptian Chronicles has been posting radio clips of the 1001 Nights in Arabic.  During Ramadan in the Middle East it is common for family and friends to gather to watch special TV serials and radio shows and the 1001 Nights both on TV and the Radio has been a staple of the holy month for years, particularly in Egypt.

Here is the Barber of Bagdad, for more postings on her blog click the link '1001' below this post.

http://egyptianchronicles.blogspot.com/2010/08/ramadans-arabian-nights-barber-of_26.html
Posted by Michael Lundell at 10:03 AM No comments:

HD - The Walls Do Not Fall

Recently came across this subtle reference to the Nights in a poem by HD (http://en.wikipedia.org/wiki/Hilda_Doolittle).

The poem is called "The Walls Do Not Fall" and this is part 5:

When in the company of the gods,
I loved and was loved,

never was my mind stirred
to such rapture,

my heart moved
to such pleasure,

as now, to discover
over Love, a new master:

His, the track in the sand
from a plum-tree in flower

to a half-open hut-door,
(or track would have been,

but wind blows sand-prints from the sand,
whether seen or unseen):

His, the Genius in the jar
which the Fisherman finds,

He is Mage,
bringing myrrh.
Posted by Michael Lundell at 2:20 PM No comments:

I'm not too familiar with the story collection known as "One Hundred and One Nights" which, according to The Arabian Nights Encyclopedia originated from North Africa and contains some elements of the familiar stories from some of the oldest versions of the 1001 Nights.  If someone can point toward a copy for sale somewhere online or elsewhere I'd appreciate it (it's only in Arabic and French I believe).

From the encyclopedia:  "The work is structured as a frame story resembling the frame story of the Arabian Nights, with the motifs of adultery, the cycle of marriage and execution, and the figures of Shahrazad and Dinarzad (Dunyazad).  The collection contains eighteen stories.  These stories are similar to well-known stories in the Arabian Nights such as Uns al-Wujud and al-Ward fi'l-Akman, Ni'ma and Nu'm, The Three Apples, and Hasan of Basra.  The Mi'at Layla wa-layla also contains versions of the Book of Sindbad, The Ebony Horse, and The City of Brass" (vol 2 594-5).

The encyclopedia also says these stories were written in the 19th century, well after the main known Arabic versions of the 1001 Nights.

A recent news article featuring German scholar and translator Claudia Ott suggests that she has found a manuscript of the 101 Nights which predates even Galland's Syrian manuscript which is, if true, one of the most significant manuscript findings in the Nights' history.  The article suggests that this 101 Nights' manuscript dates from the 13th century which, apart from the Nabia Abbott fragment, would be the oldest manuscript for any stories relating to the 1001 Nights.

Whether or not this manuscript is indeed as old as they are claiming and what stories it contains remains to be seen but it is a very very interesting development nonetheless.

Here is the link to the article/interview with Ott:  http://www.qantara.de/webcom/show_article.php/_c-310/_nr-761/i.html

"However, there are divergent opinions on the relationship between the two books. There is already a critical edition of the "101 Nights" based on much more recent manuscripts from the late 18th and early 19th centuries, whose publisher, Mahmud Tarshuna, claims that "101 Nights" is the substantially older and more original text. His argument uses motifs from the framing narrative to claim that the "101 Nights" is closer to the Sanskrit and Pali texts of their old Indian literary sources than "1001 Nights" is.

But we also have some very old sources for "1001 Nights". In Chicago in 1949, a double sheet of paper was discovered in a pile of papyrus that had been brought back from Egypt. It bore the title "Thousand Nights" ("alf layla" in Arabic) and the beginning of a description of one night. The double sheet is a palimpsest dated 879. Its origins are evidently not Egyptian, where papyrus was still preferred to paper at that time, but Syrian."

"This also fits with what the Arabic sources tell us. Contemporary booksellers reports make it clear that a complete version, with 1000 Nights, must already have existed in the 9th century. Over the centuries several fragments of the work have been found, each of which have probably looked rather different from one another. The 1001st night was probably added in the early 12th century. In a notebook, discovered by chance in the Geniza in a synagogue in Cairo, there is the first known mention of the complete title on a lending note from around 1150: "Alf layla wa-layla" – "The Thousand and One Nights".

So I am convinced that "101Nights" and "1001 Nights" are part of a parallel tradition. "The Hundred and One Nights" and "The Thousand and One Nights" were contemporaneous with one another, the one probably better known in the west, the other in the east of the Arabian world. But all of this is something that requires further investigation. A magnificent chapter in Arab literary history has just been reopened."
Posted by Michael Lundell at 1:53 PM No comments:

Austen Layard and the lure of the Nights' East


Many thanks to JC for passing on this great article about Austen Layard (from the same website: "Austen Henry Layard (1817-1894) is famous for discovering and excavating the palaces of the Assyrian kings. Undertaken between 1845 and 1851, this achievement made him celebrated as one of archaeology’s great pioneers, a man who brought to public notice a civilization few knew very much about before. The autobiographical materials presented here describe his earlier life in England and on the continent — and especially the years of his original journey eastward and his dramatic adventures among the Bakhtiari of the Zagros Mountains (1849-1842).").

The article is about how Layard was drawn to travel to the Middle East (and perhaps develop political sympathies for it as well) due to his love of the Arabian Nights.

From the article: “The work in which I took the greatest delight,” he wrote, “was ‘The Arabian Nights’.” In their apartment within the Rucellai Palace, the Layard family home in Florence, “I was accustomed to spend hours stretched upon the floor, under a great gilded Florentine table, poring over this enchanting volume. My imagination became so much excited by it that I thought and dreamt of little else but ‘djinns’ and ‘ghouls’ and fairies and lovely princesses, until I believed in their existence…” Moreover, he adds, “My admiration for ‘The Arabian Nights’ has never left me. I can read them now (he was writing this late in life) with almost as much delight as I read them when a boy. They have had no little influence upon my life and career; for to them I attribute that love of travel and adventure which took me to the East, and led me to the discovery of the ruins of Nineveh.”
Posted by Michael Lundell at 3:44 PM No comments:

Here is an uploaded version of the story (in Arabic) "Abu Qir the Dyer and Abu Sir the Barber" by Egyptian children's author Kamel Kilani. The story is originally found in Calcutta II. 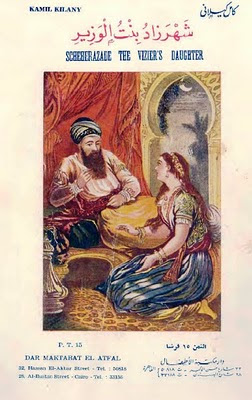 Here's a great post from blogger Baheyya on the Egyptian author Kamel Kilani, an author who popularized children's versions of the Nights in Egypt in the early 20th century.  Her post is primarily biographical and it's the best thing I've read on Kilani online in English and a great intro to the development of children's literature in Egypt.

And from the post:  "Kamel Kilani Ibrahim Kilani didn’t set out to be the modern Egyptian pioneer of children’s literature. He just adored stories and had fond memories of a Greek nanny who raised him on a steady diet of fantastic myths and legends. He also recalled being captivated by tales of Abu Zayd al-Hilali and al-Zanati Khalifa recounted by an itinerant Azharite poet and storyteller in Midan al-Qala’a. Kilani was born on 20 October 1897 in the citadel neighborhood in Cairo, to a father who was a prominent engineer. He studied English literature in high school and enrolled at the Egyptian University (now Cairo University) from 1917 to 1930, reading French and English, and also attending Arabic grammar, logic, and morphology classes at al-Azhar. He spent a few brief years as a high school English teacher and was then appointed as an editor and reviser at the Awqaf Ministry in 1922 (where Naguib Mahfouz also worked), where he spent the rest of his career until retirement in 1954." 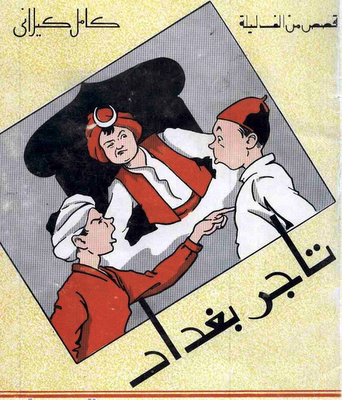 Posted by Michael Lundell at 12:22 PM No comments: